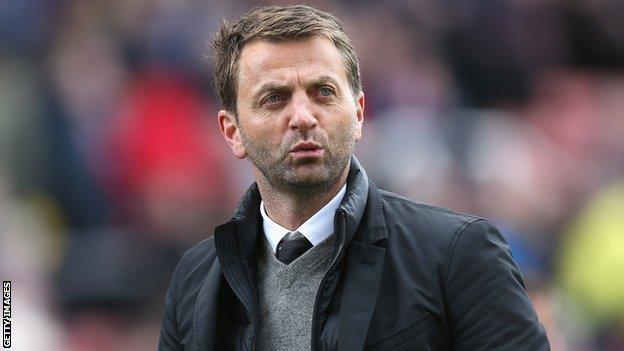 Tim Sherwood says he is already looking forward to his next management job.

Sherwood, 45, has said he enjoyed the pressure of top-flight management at Spurs, and insists he would not have done things any differently.

"I really enjoyed it and I can't wait to get back in - perversely I like doing it," he told ITV4.

"To want to do that job you must be crazy, but I knew what I was going into."

Sherwood says the responsibility of the Tottenham job felt all-encompassing, but believes he learned a lot about management in his five-month tenure and says that he will not change his working style.

"There's a lot of tension and pressure occupies your mind totally. I was waking up in the night thinking of teams, who you should play," he said.

"It was a massive learning curve, my first opportunity to manage.

"I've seen wins, defeats and draws and I've seen a few tantrums - and the sack, which I didn't want to see. Would I do anything different? Probably not."

Sherwood signed an 18-month deal as manager in December 2013, after two matches in temporary charge following the sacking of Villas-Boas.

He led Tottenham to a sixth-placed finish and qualified for next season's Europa League, but endured continued speculation over his future during his spell in charge, with his club having to deny claims from Ajax that they had enquired over the availability of their manager Frank De Boer.

"Put it this way, I didn't fall off my chair when they told me. Obviously I was disappointed to lose my job," added Sherwood.