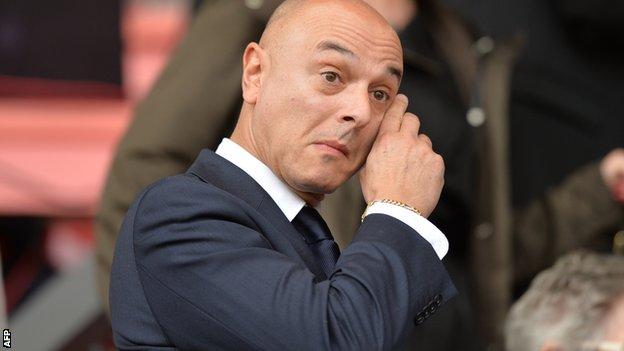 Tottenham chairman Daniel Levy is "not a football man", according to former Spurs player and coach Clive Allen.

Nine managers have left Spurs since Levy took over in 2001, the most recent being Tim Sherwood, who was sacked on Tuesday after five months in charge.

Allen, 52, described Levy as an "incredible" businessman but criticised his football-related decisions.

"I don't think he is a football man," he told BBC Radio 5 live. "Those decisions have come back to haunt him."

Allen, who was interim manager of Spurs for one match in 2007 after Martin Jol was sacked, also criticised the recent transfer dealings of the club.

"It's a very expensive squad and someone has to be answerable for that," he said.

"It's so bitterly disappointing the squad has finished sixth this season and the squad of players, in all honesty, are not competitive with the top four teams.

"A decision was made that a new direction had to be found and I just wonder what that direction is."

Sherwood, 45, was sacked less than a week after comparing himself to a "supply teacher", with players being told by their agents he would not be at the club next season.