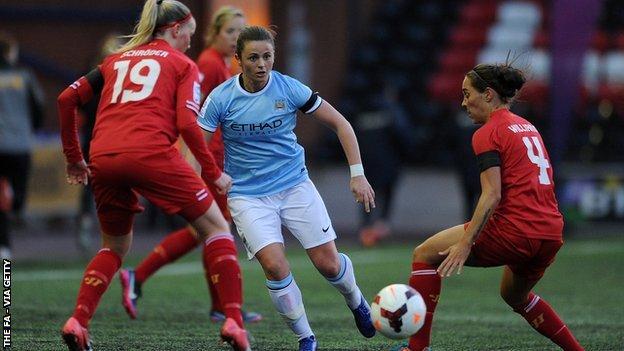 Chelsea goalkeeper Christiane Endler had to make a fine save from defender Sophie Perry as Millwall looked for an early goal.

But the home side took control and striker Eni Aluko shot them in front after 37 minutes.

The lead was doubled in the final minute of the first half, midfielder Jodie Brett rounding goalkeeper Frankie Gibbs to tap the ball home.

Striker Ayese put the result beyond doubt with a goal from midfielder Dani Buet's 79th-minute pass.

And Buet was again the provider as Ayese completed the scoring three minutes from time.

Watford bossed the first half and midfielder Sarah Wiltshire made the breakthrough with a cool finish from striker Magda Mosengo's 37th-minute pass.

The Bees pulled a goal back through midfielder Taylor O'Leary's 71st-minute strike.

But after a good spell of pressure from the home side, Watford's victory was wrapped up with a Renee Hector header a minute from time.

The Super League's newest top-flight team started the season slowly but they are beginning to look a real threat.

City lost 1-0 at Liverpool on their league debut and that defeat could have been heavier.

This was only Manchester City's third win of the season. They have lost four and are without a win in the Women's Super League

But they were thoroughly deserving of this Continental Cup win, set up by a stunning 25-yard strike by McManus after just five minutes.

Dowie equalised with a 20th-minute header and almost put the Reds in front with a shot that went narrowly wide just after half-time.

And the home side comfortably held on to their lead to complete what could prove to be a significant victory.

Everton were in control from the kick-off but took until the 39th-minute to take the lead through midfielder Kelly Jones.

And three minutes from time Lauren Davies marked her debut with a neat angled finish to complete the scoring.

Two early goals set Birmingham up for a comfortable victory.

Striker Hannah Keryakoplis raced on to a pass from right-back Chelsea Weston to open the scoring in the seventh-minute.

Captain Karen Carney hit the post as Blues kept up the pressure.

And midfielder Moore found the net with a well-struck 25-yard drive in the 14th-minute.

WSL2 side Villa, up against their well established top-flight neighbours, rarely threatened to force their way back into the game.

And twice they almost went further behind as substitutes Kirsty Linnett and Kate Wilkinson both struck the post during the closing stages.