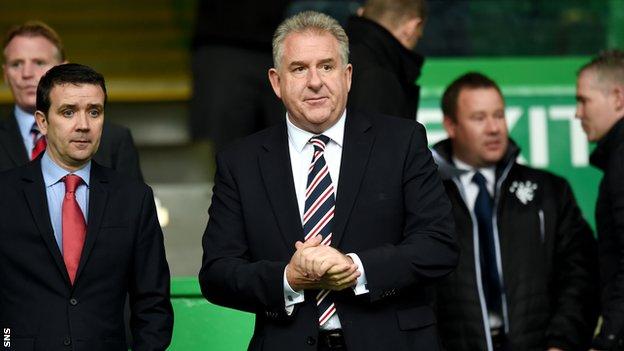 The Union of Fans have been campaigning to gain security over the properties, and set up the Ibrox 1972 fund for fans to pay season ticket money into.

Two days before the deadline, season ticket sales are in the low thousands.

"Mr Wallace agreed to discuss [the undertakings] with the rest of the PLC board as a matter of urgency," said UoF in a statement.

The group - a coalition of the club's main supporters organisations - has been seeking a meeting with Wallace for several weeks. The invite to Ibrox came with season ticket sales "slow" by Wallace's own admission, which threatens the business's ability to continue as a going concern.

The Ibrox 1972 fund, which has ex-Rangers captain Richard Gough and former Ibrox board member Dave King as directors, was established for fans who are unhappy with the way the club has been run.

The aim was to only hand over the season ticket renewal money to the club in return for gaining security over Ibrox and Murray Park.

Any proposal by the board will be evaluated by our lawyers and a decision will then be taken on how to move forward. We will keep fans fully informed as discussions continue

Wallace has consistently maintained that granting security was not possible. However, in the meeting, which was also attended by the non-executive director Norman Crighton and the shareholder Sandy Easdale, he offered a legally-binding undertaking with respect to Ibrox.

UoF then also sought the same protection for Murray Park.

"A proposal was made by Mr Wallace that whilst the board would not grant a security, they could consider giving a legally binding undertaking which would protect Ibrox from sale, sale and leaseback, or as any form of security for a loan or other finance," said UoF in a statement.

"We made it clear to Mr Wallace that we felt it was also appropriate that they provide the same undertaking for Murray Park.

"We believe we accurately conveyed the fears of supporters that either or both of these club assets could be lost in a scenario where they were used for any sale and leaseback, or other loan security.

"Any proposal by the board will be evaluated by our lawyers and a decision will then be taken on how to move forward. We will keep fans fully informed as discussions continue."

If season ticket sales slump, Rangers will need to seek external funding to meet running costs. If they cannot borrow against the property assets, the likelihood is that they will pre-emptively offer 43m unissued shares to current shareholders, although that would not generate enough funds to see the club through the coming season.

In his 120-day business review, Wallace raised the possibility of launching a new share issue in the autumn, a move King has been seeking for several months to allow him to invest directly in the club.