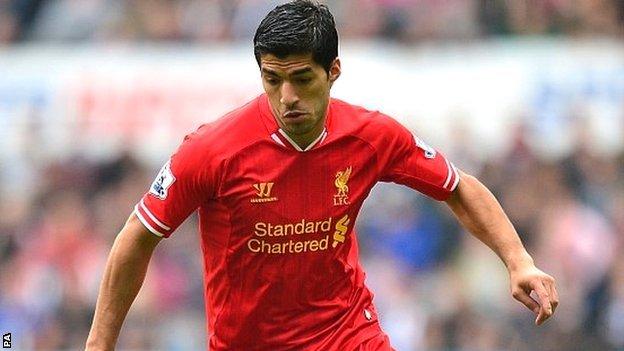 Liverpool striker Luis Suarez has dismissed speculation linking him with a move away from Anfield this summer.

The 27-year-old Uruguay international signed a new four-and-a-half year contract in December and denied that a clause allows him to join Real Madrid or Barcelona this summer.

"There is no clause that suggests a priority for a specific team," he said.

"My head now is focused on the World Cup. My agent tells me what's there. It's more speculation than reality."

Suarez, who joined Liverpool from Ajax for £22m in 2011, wanted to leave the club last summer, with Arsenal making an offer of £40m plus £1 in the belief it would trigger a clause in his contract which they thought existed for any Champions League club.

Suarez stayed and had a superb season after missing the first six matches of the campaign to complete his ban for biting Chelsea's Branislav Ivanovic.

Liverpool were top of the table just three weeks ago but lost to Chelsea before squandering a 3-0 lead in the final 11 minutes of their next match at Crystal Palace to be held to a 3-3 draw.

Suarez buried his face in his shirt after that draw at Selhurst Park and said: "I was so angry on the inside. A week before we had real hopes of winning the league and after the Palace game, we knew that it had gone.

"We had lost the chance. I felt frustration and rage at the fact that the opportunity had been lost.

"I covered my face because I was so hurt and frustrated. I preferred people not to see me."