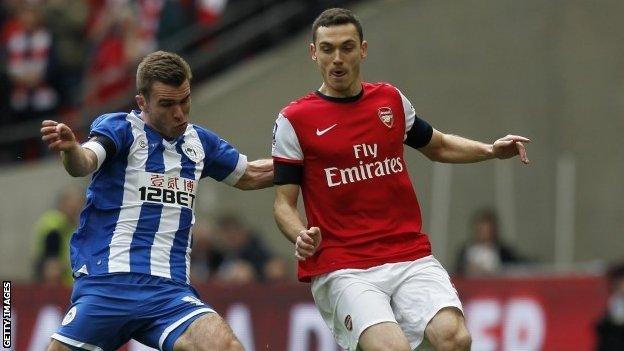 Arsenal club captain Thomas Vermaelen says victory over Hull in the FA Cup final could act as the catalyst for bringing more success to the Gunners.

Arsene Wenger's side have not won a trophy since the the 2005 FA Cup.

Belgian defender Vermaelen, 28, said: "It will give us a massive boost for the next few years if we can win the FA Cup final.

"There's lots of potential in this team and it will give them confidence for the following seasons."

Arsenal have beaten Hull twice this season, including a 3-0 success at the KC Stadium in April.

But Vermaelen stressed the North Londoners were not complacent, saying: "They have some individuals with a lot of qualities."

Vermaelen joined Arsenal in a deal worth £10m in the summer of 2009, but is out of contract at the end of the season.

"My future's not important at the moment," he said.

The Gunners, who have qualified for the Champions League every season since Wenger became manager at the start of the 1996-97 campaign, have lost three finals since they last won silverware nine years ago.

They were runners-up in the League Cup in 2007 and 2011, and were defeated by Barcelona in the final of the Champions League in 2006.