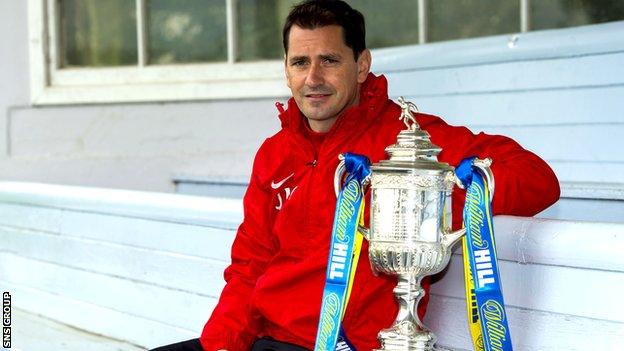 Jackie McNamara hopes his Dundee United players seize the chance to be part of the club's history in Saturday's Scottish Cup final with St Johnstone.

Most of the current Tangerines squad were not part of the 2010 Cup final-winning side over Ross County.

"That's what it's about, to win things," McNamara told BBC Scotland. "As a footballer, that's what you want to be remembered for.

"I'm always confident in the players. I know what they're capable of doing."

United's youthful side has earned plaudits this season and left-back Andrew Robertson won PFA Scotland's young player of the year award as well as earning his first Scotland cap.

"The lads have done fantastic this season with their work-rate and everything else they've put in," said McNamara.

"Every time I speak about them, I speak about what they're good at, because I see them every day. I know their abilities and what they're capable of doing. At certain times this season they've got to that but they've still a long, long way to go to what I see every day.

"Some of them are having their first season in professional football and they're in a cup final. They maybe think it's the norm. It's John Rankin's first final at 30 and he'll want to go and cherish that as well."

After United won the first of four Premiership encounters with Saints this season, the Perth side were victors in the next three.

But McNamara said: "It doesn't change anything. We both know what each side's capable of.

"If you have one or two off their game then you can maybe get away with a good performance but if there's more than that - which has maybe happened a few times against them this season - you end up losing.

"They're strong, they're experienced, they're well organised. They don't break their shape very often. Their midfield do a lot of work for them, closing down and protecting their back four.

"We know what they're capable of doing. We know we have to be very good on the day to beat them."

Meanwhile, Tannadice chairman Stephen Thompson believes McNamara will have time to build on a promising start to his Tannadice career.

United this month rejected an approach from Blackpool, while Celtic boss Neil Lennon thinks his former team-mate will be courted by other English clubs.

"Jackie's looking for a house up this part of the world and he's committed to the club short-term and medium-term," Thompson told BBC Scotland.

"You can't say long-term as you never know in football."

McNamara led United to fourth place in the league in his first full season in charge.

"It is only 16 months ago that Jackie came in and we ended up fourth in the league and we're in a cup final, so it's pretty rapid progress with a pretty young team," added Thompson.

"The club and Jackie knocked the Blackpool thing on the head pretty quickly. We're both pretty happy working together."