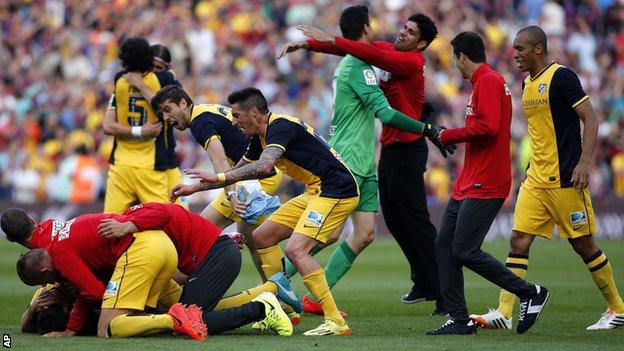 Atletico Madrid won La Liga for the first time since 1996 by securing a draw in a pulsating match at Barcelona.

Striker Diego Costa went off injured for Atletico early on and Barcelona capitalised as Alexis Sanchez smashed in a superb opener.

Atletico came out strong in the second half as David Villa hit the post before Diego Godin headed an equaliser.

Barcelona would have won the title with a win and Dani Alves went close with a fierce drive, but Atletico held on.

The final whistle was greeted by wild celebrations from the Atletico players and coaching staff, while the entire Nou Camp stood to applaud Diego Simeone's side as they finally ended the Barcelona-Real Madrid duopoly in Spanish football.

The draw meant Atletico finished first with 90 points, three ahead of Barcelona and Real.

It completed what has been a superb season for Atletico, which has seen them take victory at city rivals Real, as well as win nine league games in succession to go top of the table in March.

Their run faltered slightly towards the end, as they lost to Levante and drew at home to Malaga, but they went into the game against Barcelona knowing a point would be enough to win the title.

If that gave Atletico players any psychological advantage, it was swiftly eradicated when Simeone's side lost two of their key players inside the opening 20 minutes.

Their first casualty was Costa. The striker, with 27 goals in the league this season, had only just returned to the side after missing last week's draw with Malaga, and he lasted just 14 minutes before his hamstring went after a brief sprint.

Costa limped off in tears and just seven minutes later it got worse for the visitors. Arda Turan, so often the creator of Atletico's better moves this season, landed on his back awkwardly when challenging for possession and he too was unable to continue.

To Atletico's credit, they did not let that double blow disrupt them as they managed to keep Barcelona at arm's length, whilst also threatening occasionally themselves.

Atletico's Tiago directed a header over the bar from Koke's inviting cross, before Pedro missed with a similar attempt for Barcelona soon after.

There had barely been a shot on target in the first half hour but it was a moment of brilliance from Sanchez that gave Barcelona the lead.

Cesc Fabregas curled a ball into the box for Lionel Messi who, with his back to goal, chested the ball into the path of an onrushing Sanchez, who smashed a first time effort from the tightest of angles just inside the top right of the Atletico goal.

The half-time whistle provided Simeone the chance to offer words of encouragement to his players, and whatever he said evidently worked as the visitors made a storming start to the second half.

Villa's shot on the turn struck the post, before the former Barcelona striker saw a low, left-footed effort saved by Pinto, but their pressure paid dividends just five minutes after the restart when Gabi whipped a corner into the middle of the area where Godin rose highest to send a bullet header low into the back of the net.

Barcelona needed to regain the initiative if they were to successfully defend the league title and the balance of play quickly swung back in their favour, with the visitors seemingly content to soak up pressure and try and hit the hosts on the counter.

Messi, quiet for large periods of the game, had the ball in the net midway through the second half, but the Argentine's effort was ruled offside, before Alves struck a shot from distance that seemed destined for the top corner, only for Atletico keeper Thibaut Courtois to react superbly to push the ball over his goal.

The Atletico players held their nerve to keep Barcelona at bay in the final 10 minutes before the final whistle confirmed their status as league champions.

With one trophy secured, Simeone will now switch his attention to the Champions League, with Atletico taking on Real Madrid in the final on Saturday, 24 May.