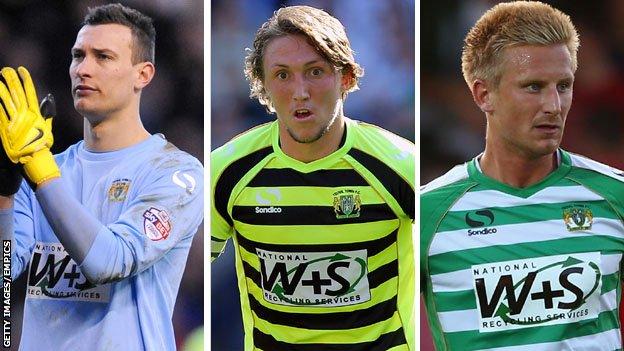 Goalkeeper Marek Stech and defenders Luke Ayling and Byron Webster are expected to leave Yeovil, according to manager Gary Johnson.

All three were part of the squad that won promotion to the Championship via the play-offs last summer.

The trio have been offered new contracts but with Yeovil dropping back down to League One next term, Johnson said: "I think we'll lose all three."

However, Johnson confirmed striker James Hayter is set to sign a new deal.

The 34-year-old former Bournemouth forward has scored 24 goals in 94 games during his two seasons at Huish Park.

I'd be surprised if Marek came back. He's ready in his head to move on. It's the same with Byron and Luke

Stech, 24, has been Yeovil's first-choice keeper since his arrival from West Ham in 2012, following a successful loan spell, and he has recently been called up the Czech Republic.

Ayling, 22, is a product of Arsenal's academy and has spent the last four years at Yeovil, making 181 appearances.

Webster, 27, played under Johnson at Northampton and joined the Glovers in 2012. He has since played 98 games and scored nine goals.

"I'd be surprised if Marek came back. He's ready in his head to move on. It's the same with Byron and Luke," Johnson told BBC Somerset.

"With Luke, the only good thing will be that he's under 24 so we'll be due some compensation. Hopefully he'll go to Real Madrid and then the compensation will be quite high.

"However, they've all been made offers and if things don't happen for them, then we're there for them."