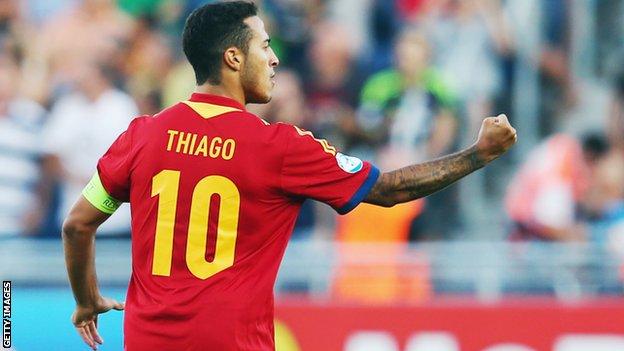 Bayern Munich midfielder Thiago Alcantara has been ruled out of Spain's World Cup squad because of a knee injury.

The 23-year-old was named in Spain's provisional squad on Monday but will require surgery after tearing a knee ligament this week.

"This is bitter for Thiago and I feel sorry for him," said Bayern chief executive Karl-Heinz Rummenigge.

Holders Spain are in Group B along with Netherlands, Chile and Australia.

It is the latest setback for Thiago, who has missed the latter part of the season with injury. He will also miss the German Cup final against Borussia Dortmund on Saturday.

Rummenigge said: "A young man who wanted to come back at the World Cup, and suddenly his dreams are burst.

"We will take care of him now and make sure he is fit at the start of the season."

Thiago has won five caps for Spain and scored a hat-trick last summer as the Under-21s beat Italy to win the European Championship.