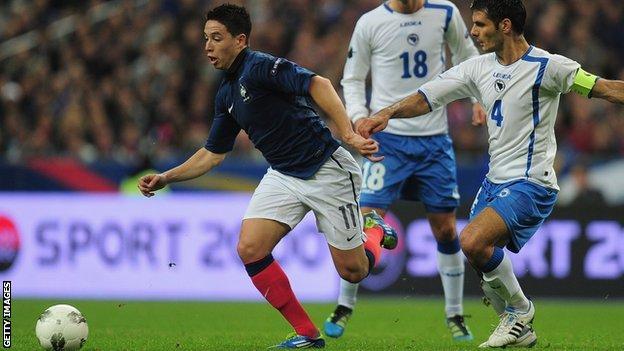 Manchester City midfielder Samir Nasri says he is considering retiring from international football after being left out the French squad for the second successive World Cup.

The 26-year-old was not in coach Didier Deschamps 23-man squad for Brazil 2014 or on the seven-strong standby list.

"It's a little bit hard to accept," he told Sky Sports News.

"I need to think about what will be my future in the national team, because missing two World Cups is really hard."

Nasri, who moved to Arsenal from hometown club Marseille in July 2008, has scored five goals in 41 international appearances.

Only six of those appearances have come in the finals of major tournaments however, after Raymond Domenech opted to leave Nasri out of France's unsuccessful 2010 World Cup campaign.

At Euro 2012, Nasri was banned for three matches for swearing at a journalist in the wake of his side's quarter-final exit to Spain.

"If you want to win the World Cup you need to select the best players and Samir, this year he has been fantastic," said Vieira.

"I think in France sometimes they are not strong enough to deal with personalities."