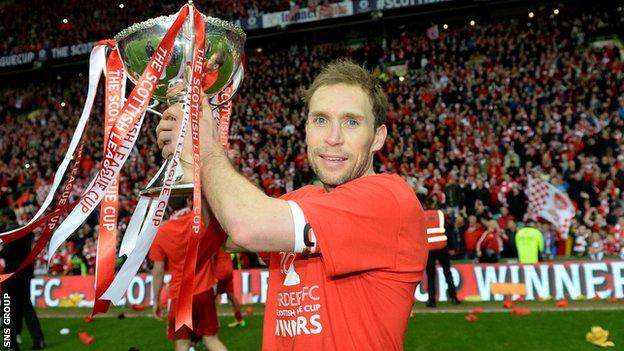 The 35-year-olds played key roles in a campaign that brought the League Cup to Pittodrie and a third place finish in the Premiership.

Josh Magennis, Scott Vernon and Nicky Weaver have been released and Alan Tate has also left following the end of his loan spell from Swansea.

Vernon, 30, leaves after scoring 43 goals in four seasons, while Magennis was sent out on loan to St Mirren in January.

Defender Russell returned for a second spell with the Dons in January 2012, while midfielder Robson moved to Pittodrie last summer.

Low made his Dons debut in 2010 but has only become a first-team regular this season, making 17 appearances and scoring once.

"All three have made important contributions to the season just finished and I'm looking for them to play their part in the progression of the club next season," manager Derek McInnes told the club website.