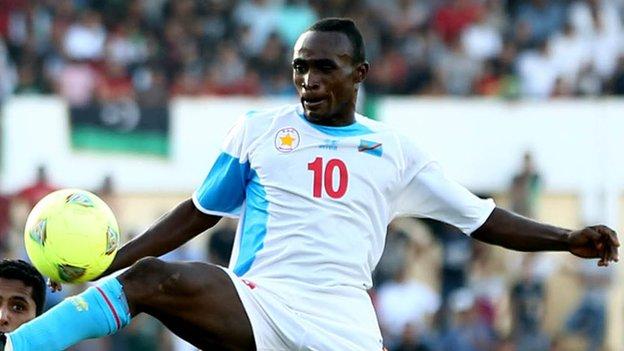 The match was played a week after 15 fans were killed in a stampede at the Tata Raphael Stadium in Kinshasa.

The incident happened after disgruntled Vita fans hurled missiles on the pitch after a 1-0 home defeat by arch-rivals TP Mazembe.

That victory had ensured Mazembe retained the league title and relegated Vita to third place on the final DR Congo Super League table.

Ndombe Mubele (pictured) put Vita Club ahead in the 19th minute against the five-time African Champions.

With 15 minutes left to play the Egyptians drew level through Momen Zakaria but the hosts sealed the win just a few minutes later with a goal from Emmanuel Ngudikana.

In the other Group A game Vita Club's local rivals TP Mazembe lost 1-0 to Sudan's Al Hilal on Friday evening.

Midfielder Salah Al Jizoli headed home the only goal of the game after 51 minutes, played out in front of a capacity crowd at the Khartoum Stadium.

The Mazembe duo of Mbwana Samata and Thomas Ulimwengu were both part of squad for the game but then immediately flew to Dar es Salaam.

The duo were then part of Tanzania's 1-0 win over Zimbabwe in an Africa Cup of Nations qualifier on Sunday.

In Group B, CS Sfaxien of Tunisia beat Libya's Al Ahly Benghazi 3-1 on Sunday in Sfax.

Taha Yassine Kheniss gave Sfaxien the lead after just 15 minutes. An own-goal from Bassem Boulaabi made it 1-1 to put the Libyans back in the match 13 minutes later.

In an eventful first-half, Sfaxien's Ben Salah scored on 34 minutes to give the hosts the advantage. Chellouf struck three minutes from time to seal Sfaxien's win.

On Saturday, there was disappointment for 2011 African Champions Esperance of Tunisia who lost to visitors Entente Setif from Algeria.

Setif took the lead after 24 minutes through Rachid Nadji, who managed to force his way between two defenders before firing across the goal to score.

El Hedi Balameiri doubled the lead for the 1988 African Champions just after half-time.

The goal came after Nadji barged Esperance defender Mohamed Ben Mansour off the ball, his shot that was parried back to him by the goalkeeper allowing him to set Balameiri for a tap in.

The hosts gave themselves a chance with a goal a few minutes later through Driss Mhirsi, whose shot somehow beat goalkeeper Abdelwahab Khedaira as he tried to save with his feet.