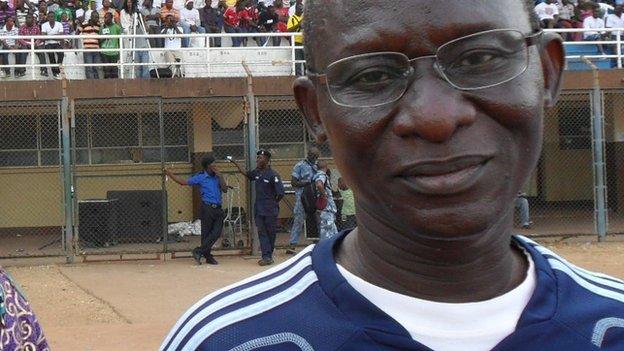 The Sierra Leone Football Association is unhappy with the country's sports ministry after the governing body's executive committee member Morrison Sannoh was prevented from travelling with the team to Sunday's Africa Cup of Nations qualifier in Swaziland.

Sannoh was already at the Lungi International airport with the Leone Stars when sports minister Paul Kamara (pictured) called and ordered his removal from the travelling party.

The SLFA subsequently withdrew their only secretariat staff in the delegation, Sorie Ibrahim Sesay, and has convened an emergency executive committee meeting on Friday to address the issue.

Deputy Minister of Sports Al Sankoh Al Conteh stated that his boss took the decision because Sannoh's name was not in the in the agreed list, among other things.

The SLFA secretary general Chris Kamara said: "It's a big embarrassment to have our leader of delegation to be prevented by minister to travel for unconfirmed issues.

"As a result we condemned the approach of the minister because he's not supposed to tell us who we should select to travel with the team."

"For now we'll deal with the matter internally and that's why we have summoned an emergency meeting on Friday.

"We'll ensure that Sannoh travels to Mbabane because he's the leader of our delegation."

The incident comes a day after minister Kamara sacked the entire technical staff of the Under-20 team for losing 2-0 at home to Ghana's Black Satellites in the African Youth Champions qualifiers last weekend without the knowledge of the SLFA.

It is not the first time minister Kamara has had problems with the SLFA since he was appointed in December 2011.

He dissolved the previous SLFA administration before a normalisation committee was set up but was ordered by the President Ernest Bai Koroma to reverse his decision after Fifa threatened to ban Sierra Leone from international competition.

Minister Kamara was several times in conflict with the previous administration over the appointment of coaches for Leone Stars and the running international matches.