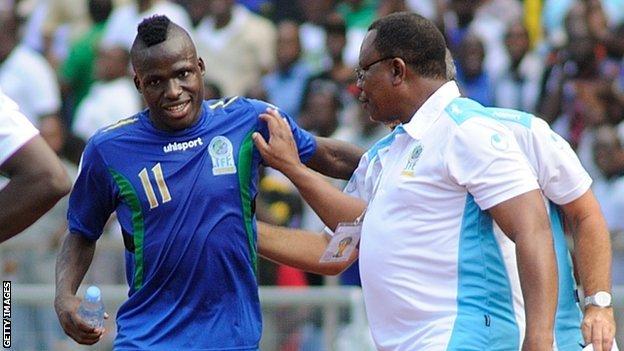 Tanzania have received a boost ahead of their 2015 Africa Cup of Nations qualifier against Zimbabwe with the news that strikers Mbwana Samata and Thomas Ulimwengu will be available to play.

The pair had initially been ruled out of the first round, first leg qualifier because they were involved in a Champions League tie for their club TP Mazembe of Democratic Republic of Congo on Friday.

But the Tanzania Football Federation said the duo would fly directly from Sudan - where TP Mazembe lost 1-0 to Al Hilal - to Dar es Salaam in time to face the Warriors on Sunday.

"I can confirm that Samata and Ulimwengu are coming, they arrive on Friday night, a few hours after playing against Al Hilal," said Taifa Stars activity coordinator Boniface Clement.

Samatta is a regular scorer for Mazembe and last season he scored six goals in their Champions League campaign.

A win against Zimbabwe over two legs will earn the Taifa Stars a tie against Mozambique or South Sudan in the second round.

Tanzania, who have a new coach in Dutchman Mart Nooij, are hoping to capitalise on Samata's form and the coach's knowledge of Southern African football to reach their first finals in 35 years.

Should they survive the knock-out rounds, the Taifa Stars will face Cape Verde, Niger and Zambia in Group F.

Meanwhile, Zimbabwe will be without their South Africa-based trio of Kingstone Nkhatha, Willard Katsande and Simba Sithole. The Kaizer Chiefs and Ajax Cape Town strikers pulled out of the game at the eleventh hour.

Coach Ian Gorowa will rely on home-based players, who have been together since last year and managed to reach the semi-finals of African Nations Championship in South Africa.