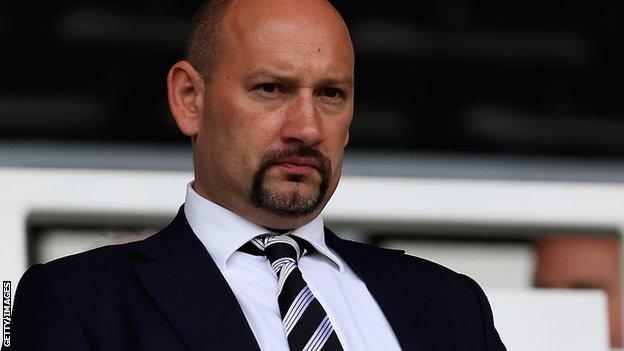 Derby County chief executive Sam Rush says the Rams will not have to make drastic changes to their squad if they win promotion to the Premier League.

The Rams will face Queens Park Rangers in the Championship play-off final.

Rush insists there would be no repeat of Crystal Palace's summer business, which saw them sign 16 players after winning last year's Wembley final.

Let's head to Wembley, enjoy the experience, enjoy the build-up, but certainly in the background the cogs continue to work

"We have the basis of a Premier League squad, I don't think we need to make hasty changes," Rush told BBC Sport.

"I think we have a super squad and we will look at that as things go on.

"We are looking to add to the group, but I don't think we need to rush anything.

"If we can strengthen in due course then, of course, we will."

Derby are the most prolific side in England's second tier, having scored 84 league goals, adding six more against Brighton & Hove Albion over two legs in the play-off semi-final.

Striker Chris Martin, who has netted 25 goals in 50 Rams appearances so far this term, became the club's first player in 18 years to score more than 20 in one season.

"The goals have been spread throughout the team - it's a team where I think they have all been stars," said Rush.

While McClaren prepares his side for their Wembley final later this month, Rush said planning for next season will continue unabated, despite not knowing what division they will be playing in.

"Let's head to Wembley, enjoy the experience, enjoy the build-up, but certainly in the background the cogs continue to work," said Rush.

"You are looking at recruitment all the time. We brought [head of football operations] Chris Evans in to head our recruitment and we have a wide national and international-scouting network."