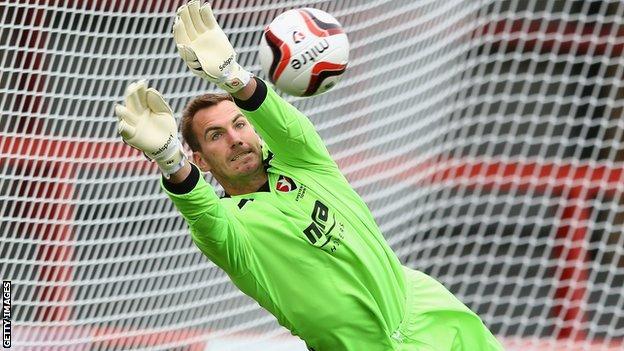 Cheltenham will give goalkeeper Scott Brown time to consider his future at the club, according to boss Mark Yates.

Brown, 29, a Robins player for the last 10 years, finds himself out of contract this summer but was one of four players offered a new deal last week.

And Yates told BBC Radio Gloucestershire: "Scott's not got a deadline on it - not yet.

Scott Brown played 107 consecutive games for Cheltenham before the arrival of England Under-21 star Jack Butland, on loan from Birmingham City.

Brown was recalled after Butland's departure and manager Mark Yates said: "It's the best ever response from a player I've ever had. He didn't moan or sulk. He just said: 'I'll show you'. He improved and it's made him the keeper he is today."

"He's not accepted what we've offered him right now and he's exercising his right to see what else is out there."

Yates continued: "I have no problem with that and if he does leave, it's with a big handshake and 'Thank you' from me.

"His contract has run out and we've done everything we can as a club to try and persuade him to sign.

"We'll see what his position is in a little while. I'm not going to force anything on him."

After coming through the academy at hometown club Wolves, Brown had spells with Bristol City and Welshpool before joining Cheltenham in 2004.

He became first-choice keeper four years later and made 107 consecutive appearances before being dropped in favour of teenage loan arrival Jack Butland - now at Stoke.

But Brown regained his starting place and has now played 287 games for the League Two club.

Yates explained that Brown had personal issues to deal with prior to deciding his future but also revealed the keeper had attracted interest elsewhere.

"Over the last two years, I think Scott has been one of the best keepers in the lower leagues. I know he can play higher, unfortunately for him no one has taken that chance yet," added the Robins boss.

"A few Scottish clubs have spoken to him and a few in the English game.

"He's been a great servant to the club. What will happen with Scotty will be sorted in the next few weeks and I'm happy with that."