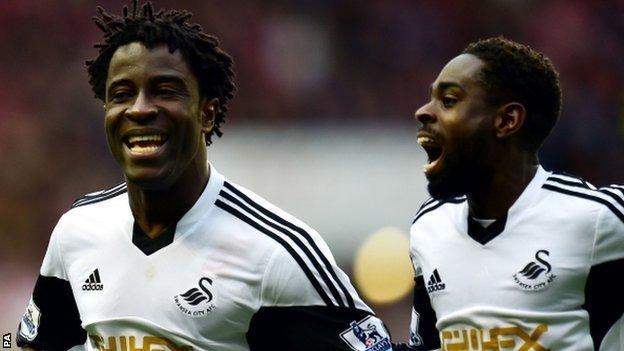 The 25-year-old striker has been linked with several clubs after scoring 25 goals in his first season.

Bony has been included in Ivory Coast's 28-man provisional squad for the World Cup in Brazil.

"There's going to be bids, it's just how strong Swansea City are in terms of holding on to these guys," Hartson said.

"Swansea are a selling club. They like to make money and like to bring players through and sell them on.

"It's going to take a strong board and a strong manager to say 'this player is vital for next season.'

I'm not too sure whether the likes of Michu, they will stay

"Bony's attitude, does he want to stay? Will he make noises if a Man City or a Bayern Munich come in?

"I would like him to stay. I want Swansea to keep all their best players."

Bony himself has said he is enjoying life at Swansea and would be happy to see out the remaining three years of his contract.

Swansea-born Hartson thinks other players such as Michu could leave the club during the close season.

Michu, 28, was Swansea's top-scorer during the 2012-2013 campaign but his second season at the club was disrupted by injury.

The Spain international was signed by previous manager Michael Laudrup from Rayo Vallecano for £2.2m in July 2012 and signed a four-year contract extension in January 2013.

"I'm not too sure whether the likes of Michu, they will stay," former Wales, Arsenal and Celtic striker Hartson added.

"They've not featured in the last few games.

"I think as well the Michael Laudrup factor, he was massively influential in bringing them players to the club, he's no longer there.

"Garry Monk may well want to keep him but I read some of Huw Jenkins' comments and Huw Jenkins wants Garry to look at players that are going to go straight into the first-team.

"They want the squad to be competitive, they don't want to be carrying squad players on two or three year contracts."