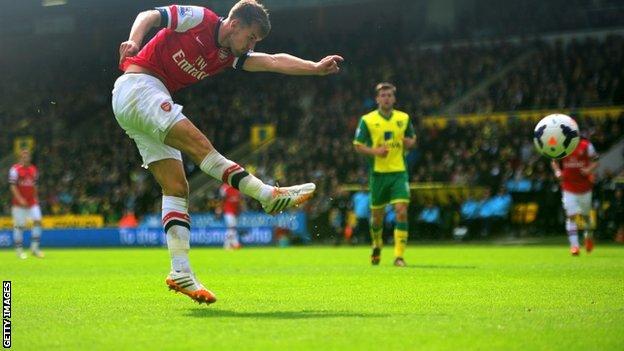 Arsenal midfielder Aaron Ramsey will be a summer transfer target for several high-profile clubs, according to ex-Gunners striker John Hartson.

Wales international Ramsey, 23, hopes to secure his first piece of silverware with Arsenal when they face Hull in Saturday's FA Cup final.

"Aaron Ramsey will be linked to 10 clubs in the summer," Hartson said.

"But I can't see him leaving Arsenal in the foreseeable future. He's settled and loves the club."

Ramsey, who signed a new five-year contract in March, impressed for Arsenal this season despite four months on the sidelines.

Hartson added: "He's a top player and Arsenal don't want to lose him.

Ramsey, then 17, became the second youngest player to play in an FA Cup final when he came on as a second-half substitute in Cardiff City's 1-0 defeat by Portsmouth at Wembley in 2008.

"He may feel 'I've had one outstanding season and Arsenal stuck by me when I wasn't playing that great a few years ago'.

"When he does get linked and when bids come in for him that tells you he's doing exceptionally well."

Caerphilly-born Ramsey left Cardiff City to join Arsene Wenger's Arsenal rather than Manchester United in the summer of 2008.

However, he broke a leg against Stoke City in February 2010, and admitted it took him years to regain his confidence.

He scored 13 goals in 27 games this season before suffering a thigh injury in the 3-1 victory at West Ham on Boxing Day.

He returned in Arsenal's defeat at Everton on 6 April and scored two goals during the closing weeks of the season, including a stunning volley on the final day against Norwich City.

"Let's not forget 18 months ago at Arsenal he was facing a bit of a backlash from the home fans. They were thinking, 'he's not really stepped up his performances'.

"But he's found something. He's gone up a gear and he's so influential to Arsenal now and the way they play."