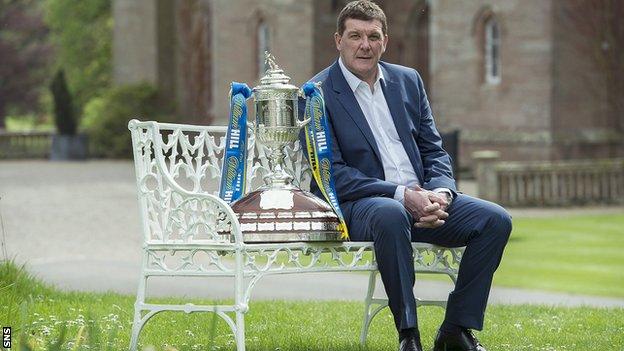 Tommy Wright insists just reaching the Scottish Cup final is not enough for St Johnstone as they attempt to secure the trophy for the first time.

Saints take on Dundee United at Celtic Park on Saturday.

"We did ask them to create history by getting to the final but the job is not done," said the Perth club's boss Wright.

"But the job isn't done because we want to be the first St Johnstone team to win it."

Wright, who turned 50 last year, will take charge of St Johnstone for the 50th time this weekend.

And top scorer Stevie May's surname and squad number, 17, replicate the date of the match.

"Everyone has given us praise and plaudits for being the first St Johnstone team to get to the final," explained Wright.

"All those things, the Stevie May thing and my 50th game and my 50th year, will be nice if you win it and you can say we were always going to win it.

"You hear people say 'we think your name is on the cup this year' and there probably has been that thought for a while.

"There is a level of excitement which has built up over the last seven days and the players are aware of the occasion and what it would mean to the club.

"But when the whistle goes the players will only be concentrating on trying to win a game of football.

"You have to make sure they don't let the occasion take over because if that happens, Dundee United are a very good side and we will end up not winning the cup.

"So we have to enjoy and embrace the occasion but don't be overcome by it."

Since taking charge of Saints last summer, Wright has led the side to a Europa League qualifying win over Rosenborg and the Scottish League Cup semi-finals, as well as a sixth-place finish in the Scottish Premiership.

"Even when we drew Aberdeen in the semi-final [of the Scottish Cup], when everybody thought Aberdeen were going to win, there was still that belief in the squad and there is still a strong belief that this could be our year," added Wright

"But we have to be focused for the game. If we turn up, we believe we have a great a chance of winning the cup."

Meanwhile, Wright will put contract talks with 27-goal striker May off until after the final.

"What I will say is that when a player wants to stay, it makes negotiations easy, added Wright.

"We will look at his contract and improve that but it is not the case that we have to spend a lot of money to encourage him to stay.

"He feels as a career move, it would be better to stay and play another year.

"That is all positive news for us but that can wait until after the final."