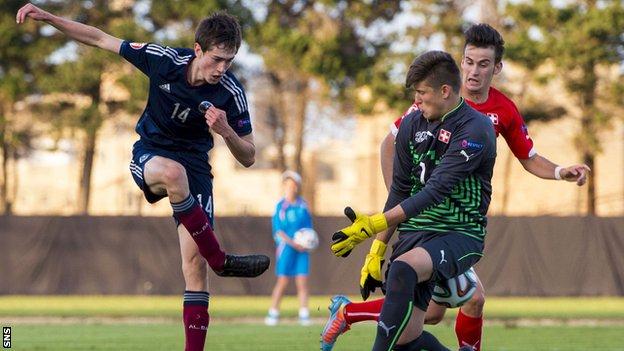 Scotland reached the semi-finals of the European Under-17 Championship semi-finals for the first time after coming from behind to beat Switzerland.

Craig Wighton, Jack Sheppard and Ryan Hardie netted to secure a 3-1 win over the Swiss, who had led through Dimitri Oberlin.

Scot Gemmill's youngsters will face the Netherlands in the last four.

Portugal topped Scotland's group and will play England in the other semi-final.

Scotland were behind at half-time following Oberlin's strike.

But Wighton's shot on the turn levelled the score before Sheppard slid in to edge Gemmill's side into the lead for the first time.

There was a suspicion of handball as Hardie went through to net Scotland's third but the goal stood.

Switzerland won a penalty before the end but Robby McCrorie saved Boris Bobic's effort from 12 yards.

England completed their group campaign with a defeat by the Dutch.