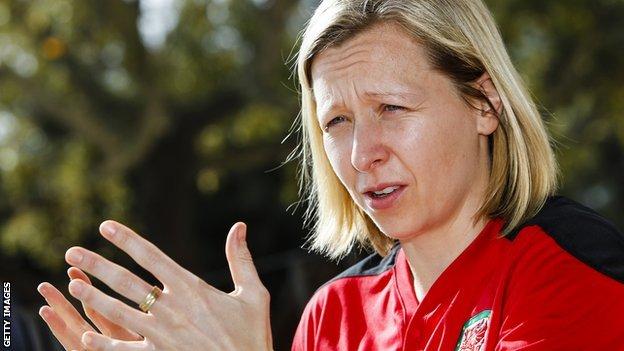 Reading manager Jayne Ludlow guided her side to a 2-0 victory over her old club Arsenal in the Women's Super League's Continental Cup.

Fran Kirby and Lauren Burton scored the goals as the holders were beaten in the Group One game.

Reading move second behind Chelsea in Group One, while Sunderland join Doncaster and Manchester City at the top of Group Two.

Fran Kirby put the Royals 1-0 up after eight minutes, the striker latching on to a through-ball from Lois Roche to fire beyond keeper Emma Byrne.

Arsenal striker Danielle Carter saw an effort ruled out for offside but, as the cup holders rallied, WSL 2 side Reading stunned them with a second on 38 minutes.

Midfielder Lauren Bruton was the player on target, the former Gunner pouncing on a loose ball to score from close range after Kirsty McGee had forced a fine save from Byrne.

Shelley Kerr's WSL1 side battled to get a foothold in the game in the second half but Reading defended in numbers to secure all three points and move up the table.

Doncaster suffered a first defeat in their Continental Cup campaign as Sunderland won 2-0 in an end-to-end match at the Keepmoat Stadium.

Beth Mead got the Black Cats off to a dream start with a goal after five minutes, the striker drilling the ball beyond the reach of Belles keeper Nicola Hobbs.

Midfielder Bethany England gave the visitors a scare with a well-struck volley that hit the side netting.

But Rachel Furness put Sunderland 2-0 up on 23 minutes when she headed home a Stephanie Bannon free kick.

The Belles came out all guns blazing at the restart but Sunderland keeper Rachael Laws was on fine form, denying Victoria Williams, Jess Sigsworth and Sue Smith.

Former England star Smith was frustrated again when she blasted a shot against the bar and it took a last gasp save from Laws to keep Smith off the scoresheet.

WSL 1 leaders Notts County turned on the style against Oxford as they ran out 4-0 winners at Abingdon United FC to move into top spot in Group Three.

The U's were under pressure from the off, with Caitlin Friend, Jess Clarke and Amy Turner all threatening in the opening moments.

Friend broke the deadlock on 24 minutes with a near post volley from a Clarke pass.

County were rattled when Oxford's Jemma Connor-Iommi smashed a free-kick against a post.

But Clarke set County on their way to a comfortable win when she bundled home a far-post header from midfielder Katie Holtham on 49 minutes.

The England striker then had a goal disallowed for offside but she made up for her disappointment on 70 minutes when she headed beyond Hannah Cox for 3-0.

Clarke then turned provider two minutes later when she dinked the ball over Cox for striker Aileen Whelan to guide the ball home.

The goalkeepers proved the difference as a gripping South West derby between Bristol and Yeovil finished goalless at Stoke Gifford Stadium.

WSL 2 outfit Yeovil started brightly in front of a crowd of 763, with Paige Stewart coming close with a low shot early on.

Evans' opposite number Mary Earps was tested at the re-start, as lone striker Katie Cook forced the keeper into a fine double save.

As the clock ticked down Evans saved a stinging half-volley from Sophie Ingle, while winger Polly Wardle almost nicked it at the end for the visitors but Earps blocked the shot.