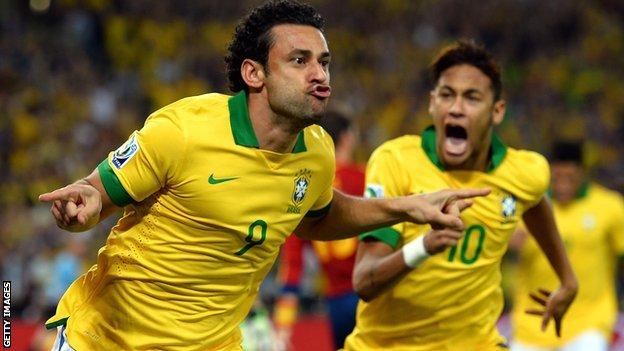 Spain were regarded as one of the greatest teams in history after becoming champions in three successive tournaments, but their heavy defeat by Brazil in the 2013 Confederations Cup final hinted for the first time that their dominance might be on the wane.

Famed and revered for the tiki-taka passing style that took them to glory at Euro 2008, the 2010 World Cup and Euro 2012, La Roja were overwhelmed by a more powerful and more direct Brazil last summer as the hosts secured a convincing 3-0 win in Rio.

So did that match herald a change in approach at the top of world football or can the style mastered by Spain still prove successful?

The Brazilians offered a contrast to their opponents in that tournament. Where Vicente Del Bosque's world champions wove patient, pretty patterns in midfield, Brazil burst forward with dynamism and urgency.

That counter-attacking style - also used to devastating effect by Real Madrid in winning this season's Champions League - could make for an intriguing tactical power struggle at the World Cup, which begins on Thursday.

"You have to say that tiki-taka has been productive for Spain and Barcelona," says former France manager Gerard Houllier, who now sits on Fifa's technical study group and helped compile the technical report for the last World Cup and Confederations Cup.

"But when you do not have the striking force of a forward and you are tired in the heat, it can become more difficult."

Spain's dominance of the world game began, in 2008, with the vibrant Fernando Torres as the spearhead of their attack.

There were signs in the 2010 World Cup that opposition teams were becoming accustomed to their patient approach by defending in numbers, but they still managed to win four successive games 1-0, including the final, with David Villa scoring crucial goals.

More recently, however, the Spanish have relied less on the traditional striker's role, winning Euro 2012 with midfielder Cesc Fabregas as their most advanced player.

Del Bosque could adopt a similar system this time around, particularly since striker Diego Costa is an injury doubt, Torres has struggled to rediscover his best form and record scorer Villa is used predominantly from the left.

Germany, too, might opt for a striker-less approach, having named only Miroslav Klose and Lukas Podolski as forwards in their squad.

But Brazil, coached by Luiz Felipe Scolari, will do things differently.

If they replicate the style they used so effectively in the Confederations Cup, a front three of Fred, Hulk and Neymar, supported by raiding full-backs Marcelo and Dani Alves, will form an attack based on pace and power.

Their aggressive attacking game relies less on possession and more on pressing from the front, combined with quick counter-attacks. That proved too much for a tired-looking Spain last year and could explain why the defending champions are rated only fourth-favourites with some bookmakers.

Fifa's technical report from the Confederations Cup noted how teams were more willing to be direct, with wide forwards joining lone strikers in attack and full-backs getting forward to make a 2-5-3 formation.

The tournament became a goal-fest. Even when games against minnows Tahiti were omitted, there was still an extra goal per game compared to the World Cup in 2010, where teams were more cautious.

If that tournament left question marks over a "lethargic" Spain, whose starting XI from the final will have an average age of 29 this summer, doubts have also been cast on the effectiveness of a possession-based game in this season's Champions League.

Both tiki-taka architects Barcelona and Bayern Munich - led by former Barca coach Pep Guardiola - were accused of over-passing at times and lacking a dynamic forward. Former Manchester United and England defender Gary Neville has called it "possession without purpose".

The Catalan side were beaten by Atletico Madrid in the semi-finals despite enjoying 71% possession. Bayern enjoyed similar amounts of the ball but were thumped 5-0 over two legs by Real Madrid at the same stage, with powerful attackers Cristiano Ronaldo, Angel Di Maria and Gareth Bale doing the damage.

Lessons from Fifa's technical report after the 2013 Confederations Cup

A direct approach - one that could be favoured by an England team seeking to utilise the pace of Daniel Sturridge and Raheem Sterling - is an enticing prospect, but can it succeed when conditions become particularly humid in Brazil?

While southern cities such as Rio, Sao Paulo and Curitiba offer temperatures of about 20-25C, cities further north such as Fortaleza, Salvador and Manaus reach 25-30C, with humidity also a factor.

It is an issue concerning former Germany midfielder Dietmar Hamann.

"Germany are lacking in the forward department," he told BBC Sport. "So we may see Thomas Muller up front, like Spain did a few years ago when they played without a recognised striker.

"Germany can play that way because they have very good offensive midfielders but you want to take your chances when you get them because you may not be able to create a lot in the hot conditions."

Spain crumbled in last summer's Confederations Cup final with one fewer day's rest than Brazil after facing Italy in Fortaleza, and former Liverpool boss Houllier added: "Before any tactics, freshness will be the most important factor because of the heat.

"The better you are able to keep possession and go forward, the better your chances for the competition. The South American teams will have a great advantage because they are used to playing more to feet and getting the ball moving around because they know that when you lose it, you have to run a lot to get it back."

That could play into the hands of Argentina or Chile, Houllier says. Spain will also benefit and, like England and Brazil, play their group games in a mix of the northern and southern host cities.

Spain midfielder Xavi says having experienced the heat of Brazil last summer will be an "immense" help to the team.

And if Costa proves his fitness and offers an added punch to Spain's attack, their dominance of the ball may prove to be decisive.