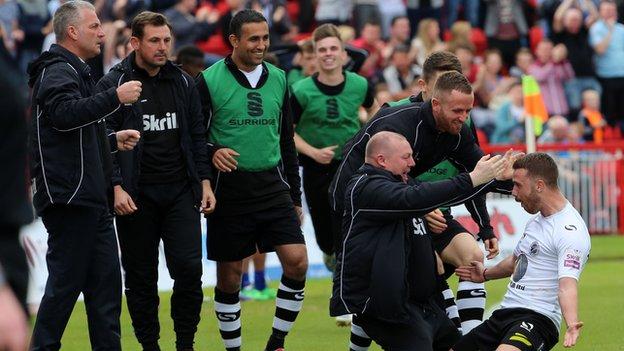 Manager Gary Mills says Gateshead must not allow the excitement of playing at Wembley to derail their bid for success in Sunday's Conference Premier play-off final against Cambridge United.

Gateshead have never appeared at the national stadium before and are seeking to return to the Football League since being voted out in 1960.

Interest has been high, with demand from TV, radio and print media.

Mills told BBC Newcastle: "We're going down there to play a football match."

The 52-year-old continued: "Players deserve all the attention and plaudits, but we have to concentrate.

"The media and the TV attention is lovely, but there comes a period where we've done all that and certainly get the players mind set on why we're going there."

The Tynesiders climbed from 19th in the table when Mills took over in September to finish third in the regular-season table and their aggregate victory against Grimsby Town in the semi-finals extended their unbeaten run to 14 matches.

Former Nottingham Forest, Leicester and Notts County midfielder Mills is no stranger to Wembley, where he has has experienced both highs and lows.

He featured in one of the great play-off finals for Leicester against Swindon in 1993, the Foxes losing a 4-3 thriller, and also appeared for Notts County when they beat Ascoli 2-1 in 1995's Anglo-Italian Cup final.

After moving into management, Mills led York City to a double Wembley triumph in 2012, winning both the FA Trophy and Conference Premier play-off final in successive weekends.

"You can handle Wembley in different ways, my players have most of all not been there," he added.

"My job is to make sure that they're not overawed by the occasion and that it is just another place to go to play football.

"That might sound simple and difficult but you've got to do it in the right way. I want to go with Gateshead and win there as well."