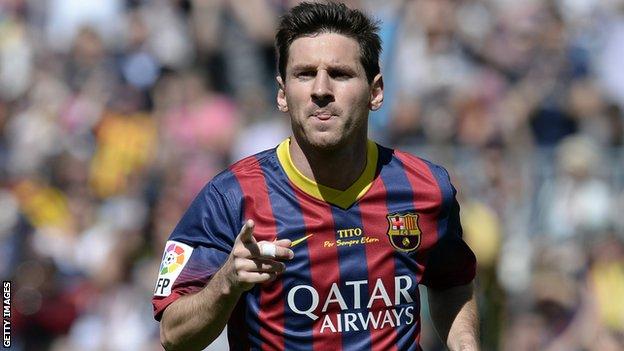 Rooney signed a new £15.6m-a-year deal in February to top the reported salaries of Real Madrid's Cristiano Ronaldo (£14.25m) and Messi, whose was thought to be earning £12.08m a year before agreeing his new deal, according to the 2013 Forbes rich list.

Barca said Messi "repeatedly expressed his excitement" while signing the new deal at the Nou Camp on Monday.

They have yet to release details about the length of the new deal with the 26-year-old forward, who scored 41 goals in 44 games last season.

The Argentina international's last deal, agreed in February last year, was due to run until 2018.

Barca announced on Friday that the revised contract had been agreed following lengthy negotiations, during which it was reported that Messi wanted to become the best-paid player in the world.

He signed the paperwork on Monday, less than 48 hours after the Catalan club were beaten to La Liga by Atletico Madrid.

£19m - The amount boxer Floyd Mayweather earned for his April fight with Marcos Maidana before pay-per-view money was added.

Claims in the Spanish media suggest Messi, a four-time Ballon d'Or winner, will be tied to the club for a further year - until June 2019 - and will be paid 20m euros (£16.3m) a season, plus performance-linked bonuses.

Ex-Newell's Old Boys youngster Messi, who moved to Barcelona's La Masia academy as a 13-year-old, has scored 342 goals in 406 appearances for the club since making his first-team debut in October 2004.