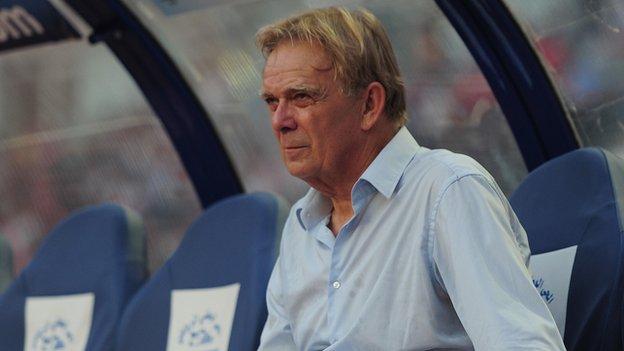 Cameroon coach Volker Fink will use pre-World Cup preparations at an Austrian training camp next week to raise his side's spirits.

The Indomitable Lions' confidence has been dented by a 5-1 thrashing by Portugal in their last match in March.

"I have to work on the spirit of the team and to find a cohesive unit, where they all give to each other and the team," Finke told the Cameroon Tribune.

Finke added he is also determined to avoid in-fighting in the camp.

"I support everyone, I encourage individuals but it must be to serve the collective. You can be individualistic but not egocentric," Finke said in a reference to the reported split in the camp at the 2010 World Cup, where Cameroon lost all three matches.

"We'll be together for two weeks. This is very important because we have time to work," Finke added of the camp in Kufstein, which starts on Tuesday.

The Indomitable Lions will play Macedonia and Paraguay in friendlies in Kufstein on 26 May and 29 May, and then go on to meet Germany in Moenchengladbach on 1 June.

Finke revealed he is ready to change the approach of the team depending on what he observes during the camp and three warm-up games.

Cameroon, who will be appearing at the World Cup for an African record seventh time, have been drawn in Group A against hosts Brazil, Croatia and open their campaign against Mexico in Natal on 13 June.

"Against Mexico, it is clear that we want to win, so we have to master a way to be very offensive against them without allowing them the opportunity to play us on the counter attack. We must know how to control the pace of the game," he said.