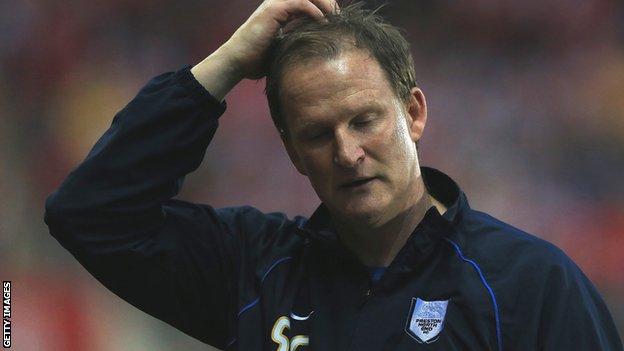 Preston manager Simon Grayson believes his squad will be stronger for the experience of losing their League One play-off semi-final to Rotherham.

The Millers won Tuesday's second-leg 3-1 to claim a 4-2 aggregate win and secure a spot at Wembley on 25 May.

"I've got a really disappointed group, which is understandable, but 90% of that dressing room are under contract for next year," said Grayson.

"We'll add to the squad and use this as a motivation for automatic promotion."

Speaking to BBC Radio Lancashire, the 44-year-old continued: "This football club is progressing. There is no doubt about that, in terms of where they were a few years ago to where we are now in a short space of time, and it will keep going in one direction."

Preston North End's play-off defeat by Rotherham means they will spend a fourth consecutive season in League One next term.

Preston have now failed to be promoted via the play-offs in nine attempts.

With the tie level at 1-1 after Saturday's first leg at Deepdale, North End took a first-half lead at the New York Stadium through Paul Gallagher's free-kick.

But goals from Wes Thomas, Lee Frecklington and Kieran Agard sealed Rotherham's place at Wembley, where they will take on Leyton Orient in search of a second successive promotion.

Grayson, who has taken three different clubs up from the third tier, admitted his side had been beaten by a "good team" in Rotherham but felt the two were evenly matched over the two legs.

"I asked the players before they went out to make sure they gave everything, and they could at least come back in - win, lose or draw - with some pride and they've done that," said the former Blackpool, Leeds and Huddersfield boss.

"Football's all about fine margins and we've not had things that have gone our way. We've hit the post two or three times and it's gone back to them rather than one of our strikers."