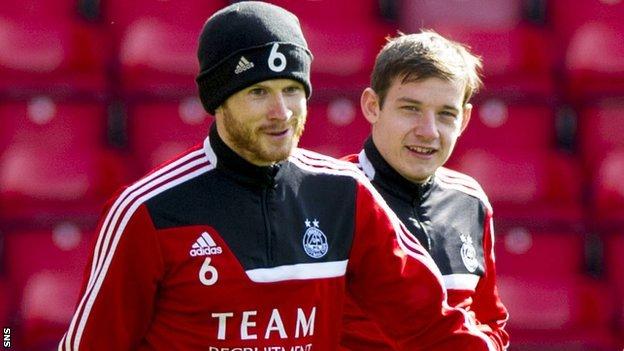 Aberdeen pair Mark Reynolds and Peter Pawlett have been called into the Scotland squad for the first time for this month's friendly against Nigeria.

It follows the withdrawal of Wigan Athletic duo James McArthur and Gary Caldwell as well as midfielders Graham Dorrans and Darren Fletcher.

Defender Reynolds, 27, and midfielder Pawlett, 23, have both been capped at Under-21 level.

Aberdeen manager Derek McInnes said: "It'll be a great boost to them."

And the Dons boss thought it was an indication of how much the pair have improved as players.

"I'm sure they'll go on to do well and I'm confident this will be the first of many call-ups for both Mark and Peter," McInnes told his club website.

Scotland face Nigeria, who are preparing for this summer's World Cup finals, at Craven Cottage in London on 28 May.

Fletcher has only recently returned to the Manchester United side after a long battle against chronic bowel disease.

Dorrans had fought his way back into West Brom's starting line-up at the end of the season as they narrowly avoided relegation.

Reynolds, previously of Motherwell and Sheffield Wednesday, was Aberdeen's player of the year this season.

Pawlett, who was born in England, has scored seven goals during what is generally regarded as the best season of his career.