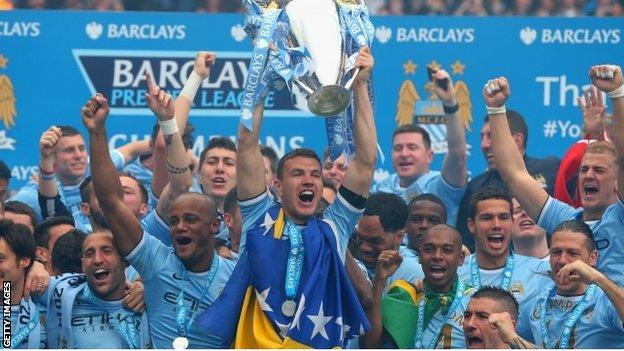 Manchester City have been fined £49m, £32m of which is suspended, and can only name a 21-man Champions League squad next season after failing Uefa financial fair play rules.

Another sanction means City can only spend £49m on players this summer, as well as any transfer fees they receive.

Paris St-Germain, one of eight other teams to breach the rules, have been handed a similar fine and cap as City.

A City statement said that they only fielded 21 players in the Champions League this season, were not planning to spend a net amount of more than £49m on players this summer and expected their wage bill to be lower next season anyway.

"At the heart of discussions is a fundamental disagreement between the club's and Uefa's respective interpretations of the FFP regulations on players purchased before 2010," it read.

"The club believes it has complied with the FFP regulations on this and all other matters.

"In normal circumstances, the club would wish to pursue its case and present its position through every avenue of recourse. However, our decision to do so must be balanced against the practical realities for our fans, for our partners and in the interests of the commercial operations of the club."

The statement added that the club expected to be operating without sanction or restriction at the beginning of the 2015-16 season.

Clubs who breached the rules had to reach a deal with Uefa, which City have done, or else take it to an adjudicatory panel in June.

Under this monitoring period, total losses of €45m (£37m) are permitted as long as clubs have owners who can cover such amounts.

Uefa introduced FFP because it fears many clubs are risking their futures by spending beyond their means, while Uefa president Michel Platini also believes the big spending of some clubs is ruining the game.

PSG's failure to adhere to FFP is understood to stem from the club's controversial contract with the Qatar Tourism Authority.

The contract is said to have been ruled as valid by Uefa but the overall value of the deal - worth up to £165m per year - has been deemed excessive.

PSG are also understood to have argued with Uefa that French income tax levels in France made complying with FFP more difficult.

Sources close to the club say that, over a three-year period, they will pay £163.9m more in wages than an equivalent club based in Germany because of taxation.

Uefa ultimately rejected the club's argument that they have to pay higher gross salaries to attract and keep their star players.