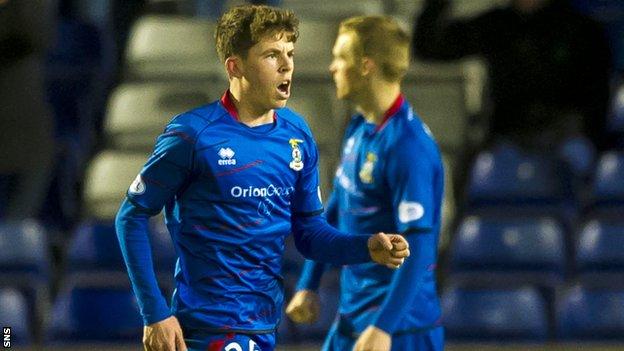 Ryan Christie has secured a contract extension after the teenage midfielder broke into the Inverness first team in the latter half of the season.

The 19-year-old has signed a two-year deal, until May 2016, with Caley Thistle having an option to retain him for a further year beyond that.

Manager John Hughes said: "He finished the season on a high.

"As a local lad who has come through the club's youth development system, it's good to have him in my plans."

Christie, the son of former Inverness midfielder and manager Charlie, made 17 first team appearances after making his debut in December and two of his three goals came in Caley Thistle's final two home games.

"I'm delighted that Ryan is staying to build on the rapid progress he has made here in the past six months," Hughes, who took up his post in December, told his club website.

"I liked the look of him in the early training sessions and, when given his opportunity, the lad took full advantage.

"My assistant, Russell Latapy, and I have been studying the youth system as we feel that recruiting from our own ranks can be a key way forward for the club."

Christie, who was out of contract this summer, was also delighted to have settled his immediate future.

"I've really enjoyed the past six months," he said. "The senior players have been a great encouragement to me since I got my chance.

"It's nice to go off on holiday with the new contract signed and sealed.

"I'm grateful to John Hughes for having faith in me and it's nice to reward him with the couple of goals in the closing matches.

"I really like the style of football we are playing and it sits well with the way we have been brought up keeping the ball down and playing football."