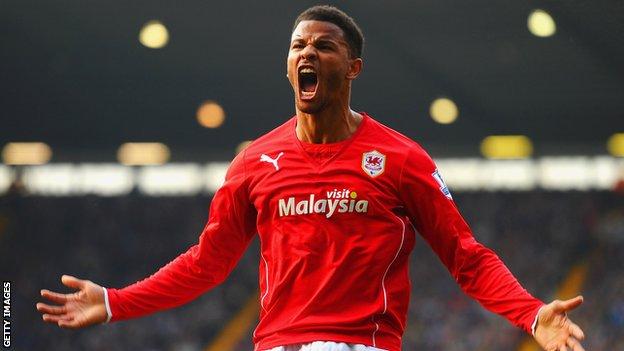 Cardiff City are holding talks with Fraizer Campbell in a bid to keep the striker at the club.

It is understood the 26-year-old has a release clause in his contract and the Bluebirds are trying to persuade him to stay following their relegation from the Premier League.

"Fraizer's done fantastically for us, not just this season but the previous season," said chairman Mehmet Dalman.

"He's very much loved at the club and we want him to stay."

The former Manchester United forward scored seven goals in 12 matches to help the club gain promotion to the English top-flight for the first time in 51 years.

This season he scored six Premier League goals for the Bluebirds, including two in the 3-2 win over the eventual champions Manchester City as well as one in the 2-2 home draw against Manchester United.

It was not enough to help the Bluebirds stay up, however, as they finished bottom of the table.

Cardiff have already started preparing for life in the Championship and have secured the signature of striker Javi Guerra from Spanish club Real Valladolid, and have had a £3m bid accepted for Bournemouth forward Lewis Grabban.

The move for Grabban will increase speculation that Campbell could be on his way, with his former club Hull City reportedly interested.