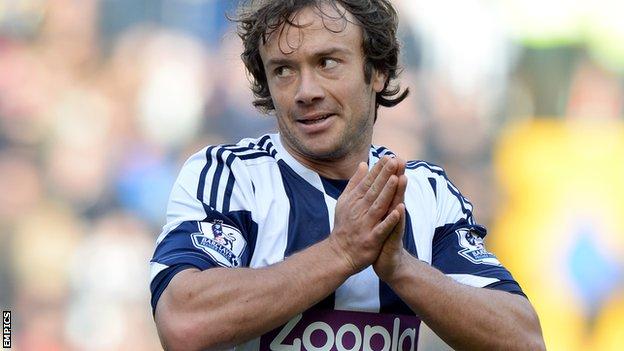 Lugano, 33, who is in Uruguay's provisional World Cup squad, signed a two-year deal last summer but the club triggered a break clause to let him go.

Midfielders Gera, 35, and Reid, 33, were out of contract and the Baggies have opted not to exercise an option to extend 29-year-old Ridgewell's deal.

Scott Allan, a 22-year-old midfielder, has also been allowed to leave.

Hungarian Gera leaves the Baggies for a third time. He played for them between 2004 and 2008, before leaving for Fulham.

After rejoining in 2011 he was released last summer before being re-signed two months later. In total he played 191 times for the club.

Former Republic of Ireland international Reid joined West Brom in 2010, initially on loan, and went on to make 87 appearances.

Midfielders Chris Brunt and Graham Dorrans have been given new contracts.

The Baggies, who avoided relegation from the Premier League by three points, are looking for a new boss after Pepe Mel left the club earlier this week.