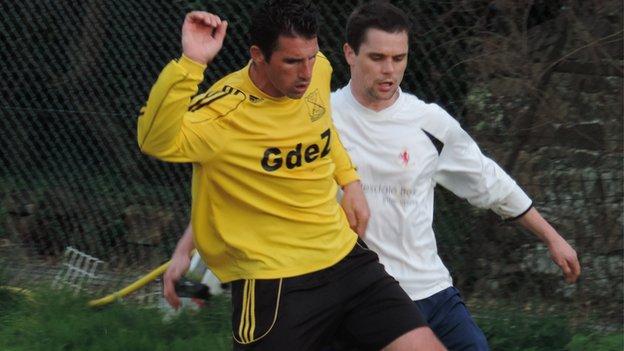 The head of Jersey's football league system fears that entering a side into the English leagues would ruin the existing set-up in the island.

Jersey Football Combination president Tim Darwin believes a similar situation has arisen in Guernsey, after Guernsey FC was formed in 2011.

The Green Lions made the Isthmian League Division One South play-offs this season.

"It's not the way forward for Jersey," said Darwin.

The league in Jersey is not very challenging

"You've got a vibrant league here, you've got a league that provides football for everyone."

After a third straight Muratti final defeat by Guernsey there have been fresh calls from the top Jersey players for more regular representative fixtures.

Even top-flight matches in the island's Premiership can struggle to attract crowds into double figures and the Combination has found it difficult to find a headline sponsor in recent years.

Meanwhile, Jersey's top netball side Team Jets have recently been promoted to the English Premier League, and Jersey Rugby Club have survived in the English Championship.

However, Darwin believes that is not the model for football in the island to follow.

"We've got players playing in the UK, they're not under the banner of Jersey FC, but they are playing at a level appropriate to them."

While Guernsey FC have again been challenging for promotion, Jersey sides have come out on top in many of the Channel Island club games, with some saying that shows the overall standard of football is better in Jersey. The Reds also beat the Greens in the women's Muratti and the inter-island clashes at youth level.

Jersey midfielder Luke Watson has described football in the island as "stale" and is among those who have called for Jersey to follow the example of the Green Lions.

But no sponsor has come forward publically to back such an idea.

"I just don't know where it's going to go," said Watson.

"The league in Jersey is not very challenging. You can go two or three weeks without a game and the enthusiasm within the players is not the same as it was when I first started playing 12 years ago.

"I'm sure if you ask young kids now I don't think they'd have the same enthusiasm as I showed."

The Jersey Football Association has consistently said it is not its responsibility to set up a team to play in England, but it would potentially back an existing club or a newly-created one if there was a decent proposal.

Jack Boyle captained Jersey in the 4-1 Muratti defeat by Guernsey and believes the two warm-up matches were not enough preparation to compete with their Channel Island rivals.

"You need games - we need some sort of programme," he told BBC Radio Jersey.

"To be given two games before a huge game against Guernsey in the Muratti - it's just so hard to compete with a team that's played 50 games in a season.

"All we want to do is play and get together as a team. We'd be better than Guernsey if we were to play in a league."