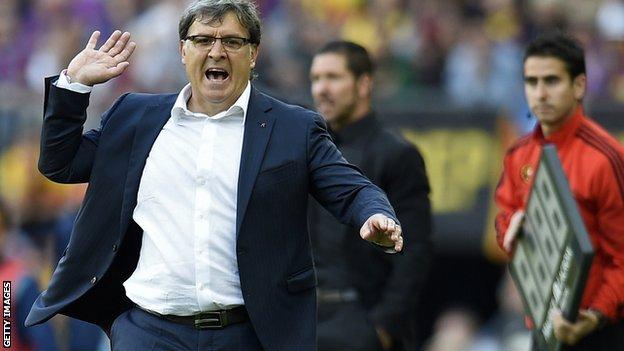 Gerardo Martino is to step down as Barcelona coach by mutual consent after failing to win La Liga.

Barcelona needed to beat Atletico Madrid in the final game of the season on Saturday, but a 1-1 draw gave the latter the title instead.

That meant Barcelona finished the season without a major trophy for the first time since 2007-08.

Martino, 51, said: "I'm sorry I was unable to deliver. I'd like to thank the club for their confidence in me."

His arrival at Barcelona marked the Argentine's first job outside of South America since a six-month spell playing for Tenerife in 1991.

Martino oversaw 40 wins in his 59 games in charge of the 2012-13 champions, but failed to deliver domestic or European success.

Barcelona exited the Champions League at the quarter-final stage, when they lost to Atletico Madrid.

They also lost to Real Madrid in the final of the Copa del Rey.

"I deeply regret not having achieved the goals that this club has always been set and achieved," Martino added.

"These are great players. My greatest gratitude goes to the players. They have made me proud."

Barca's sporting director Andoni Zubizarreta said: "We are grateful to 'Tata'. This has been a tough season."

Former Barcelona player Luis Enrique, who is to leave his role as Celta Vigo coach this summer, has been linked with replacing Martino.