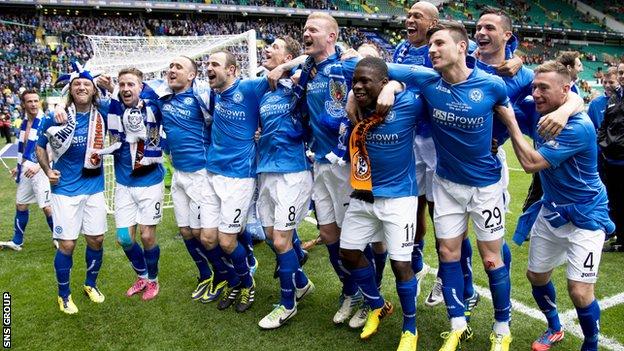 "It's the pinnacle of my career to win the Scottish Cup," said Wright after the 2-0 win over Dundee United.

"But more importantly it means a lot more to a lot more people - the supporters, the players, my staff, and (owners) Geoff and Steve Brown who have put a lot into this club.

"For us to get the first major trophy. it's so special to so many people."

The Perth club had never been to a Scottish Cup final before in their 130-year history but adapted to the occasion like seasoned campaigners, with Steven Anderson and Steven MacLean scoring the vital goals.

"I thought the semi-final was a psychological barrier," Wright explained. "I know this is a final and it's different but I thought that was lifted when we beat Aberdeen.

"We're watching the English cup final now and I think it has lost it's magic the way the game has changed there, but the Scottish Cup still has its magic.

"That's why when everyone was wanting a Dundee United-Aberdeen final I always thought that the real story was us, and it has proved to be the case."

Some 15,000 fans were backing Saints at Celtic Park in a crowd of 47,345 and many of them will be enjoying a party in Perth on Saturday night.

"We sent out a rallying call and they answered it," said Wright.

"I read that people were coming that had never been to a St Johnstone match but their dad or a relative had been a fan and had passed away, and they were making a pilgrimage to the final.

And Wright knows that chairman Steve Brown and his father Geoff, who held the post for 25 years, will enjoy the day more than most.

"I like to think I work hard for the chairman and he knew what he was getting when he appointed me," he said. "I know he will feel I have repaid his decision.

"He is just joking now that he's done everything and he's going to step down. But he won't.

"He said he had a 25-year plan and in three years we've been sixth, third, in Europe three times, he doesn't know what to do now."

Former Northern Ireland goalkeeper Wright has been in the post for almost 12 months after stepping up from his assistant's role when Steve Lomas left for Millwall.

"The players have been heroes since I took the job," Wright told BBC Scotland.

"I told the players that I trust them. I told them to believe in each other, go out and stick to the plan and we'll win the game. We knew we'd score off a set play.

"The lads were absolutely superb and I can't thank them enough."