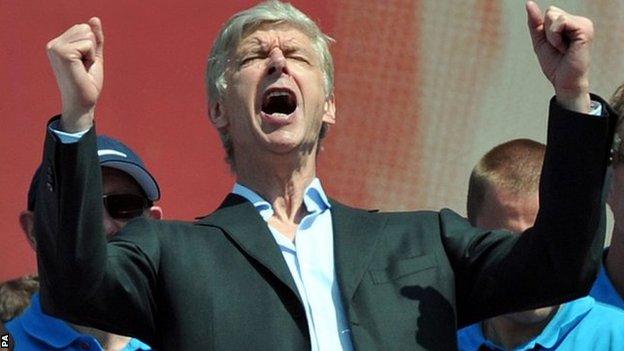 Arsenal boss Arsene Wenger said the FA Cup final comeback against Hull City can be a turning point towards a successful new era for the club.

The Gunners came from two goals down to win 3-2 after extra time and lift their first trophy for nine years.

"It was an important moment in the life of this team," said Wenger, who confirmed he will sign a new contract.

"To lose would have been a major setback but to win will be a good platform to build on."

"Arsene Wenger is a winner again. Arsenal are winners again after 120 dramatic minutes that forced manager, players and fans through so many of the experiences they have shared in recent years - only this time with a happy ending.

"Wenger has every right to celebrate this success but he must not - and surely will not - believe that this means Arsenal do not still require serious investment."

Wenger's contract is due to expire at the end of the season but he has repeatedly expressed his desire to continue in the role he has held since 1996.

Asked whether he would now sign a new deal, he said: "That should normally happen yes, and we are in very normal circumstances. It was never a question of leaving. It was a question of doing the right job for this football club."

James Chester and Curtis Davies put Hull two up inside eight minutes but Santi Cazorla pulled a goal back before half-time. Laurent Koscielny equalised to send the game into extra time, when Aaron Ramsey scored the winner.

Wenger, who won the FA Cup for the fifth time in his Arsenal career, said: "It was more important today than all the others. Twice we had won the double, so we had already won something and were not under the pressure we were under here.

"It is a feeling of relief and happiness as we were under severe pressure to win and we didn't start well of course. Hull started stronger and you could see we were hesitant. We demonstrated how to respond to being 2-0 down but we also demonstrated how not to start an FA Cup final.

"It is a big moment to win and when it happens after a long time it sometimes comes with suffering so it was a great moment."

Former manager George Graham, who led Arsenal to the league title in 1989 and 1991, said the club need to bring in "three quality players" if they are going to challenge for top-flight honours, including a midfield dynamo in the mould of 1998 World Cup winner Patrick Vieira.

"In midfield there's an embarrassment of riches, they're all very similar and I think they need a strong, Vieira type player who leads the team," the Scot told BBC Radio 5 live's Sportsweek programme.

"Up front, there's no question, that's been their failing this season. They've only got one out-and-out centre-forward and they need a class forward to add to the team."

Like Wenger, Arsenal right-back Bacary Sagna is also out of contract and has been linked with a move to Manchester City.

"I think until we start pressuring the ball much better than we're doing we'll remain vulnerable. A good team to watch, but vulnerable against the better teams."

Asked if the Cup final was his last game for Arsenal, he said: "I don't know to be honest, as everyone says I have been talking with the club for a long time and we will try to find a solution, but I don't know what that will be."

Arsenal captain Mikel Arteta praised his team's "desire" to fight back and hailed the scorer of the winning goal.

"It's unbelievable, when you go 2-0 down it is really rare to come back and win the Cup," he said.

"It has been a long time coming and hopefully this is the start of something really good. The start of the match was shocking, you would never expect to start the game like that but we showed the character, desire and spirit of this team to put it right in the end.

"Aaron Ramsey has been the best player on the pitch when he has been fit and he was the right man to score." 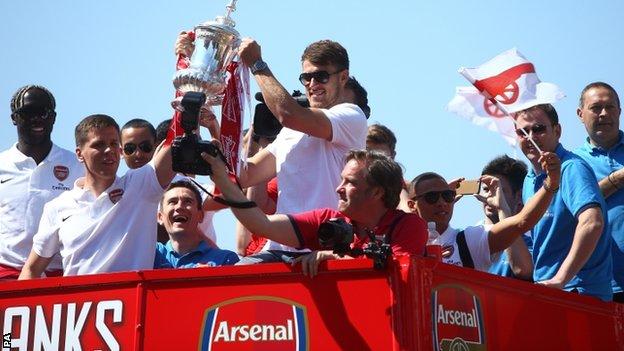 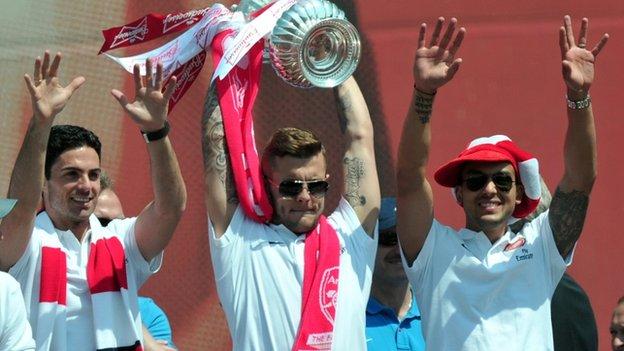 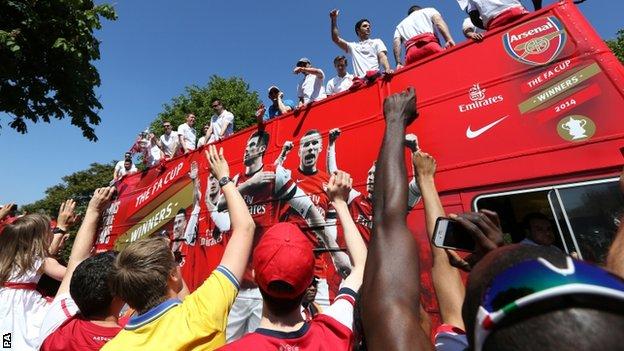