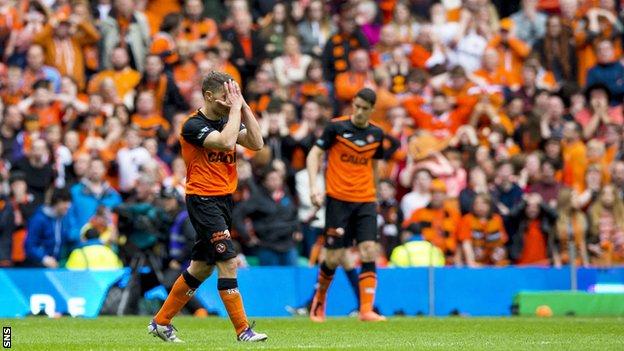 Dundee United were overwhelmed, but it was by their own shortcomings.

That regret would have lingered in the minds of the players as they stood watching the St Johnstone celebrations at Celtic Park, because they were never wholly out-played during the game. All the same, the result itself was merited.

Manager Jackie McNamara was already strategising. He remarked after the Scottish Cup final defeat that the flaws in his team's performance were familiar, since they were the same ones that had cost his team at other moments during the season. He will have begun the plotting on how to overcome them as he seeks to develop the potential of this team further.

Individual errors were excused. Goalkeeper Radoslaw Cierzniak felt he had been impeded when he rushed off his line to try to claim the corner kick that Steven Anderson opened the scoring from, and the stopper was beaten to the ball in a sliding challenge when Steven MacLean converted Saints' second goal with five minutes remaining.

McNamara, though, would have been more concerned by fundamental failings. There was, for instance, little impact from the trio of attacking players who lined up behind Nadir Ciftci. The striker won most of his aerial duals with Anderson and Frazer Wright, although the players tended to rile each other with the physicality of their play. Wright, in particular, seldom let up in his complaining.

If the two teams could have been characterised by individuals, then the way that the dependable if not pacy Anderson and Wright dealt assuredly with the potential nippy darts and bursts of the United attackers was typical.

There was no room for the United players to run in behind, and only the overlaps of Andrew Robertson from left-back generated any real threat from the flanks.

One cross from Robertson allowed Ryan Dow to flick a shot off the upright. They were probably United's two most effective players, although Ciftci hit the crossbar with a free-kick in the second-half. The Turkish forward was one of the inconsolable United players after the final whistle, but he is young enough to learn from the experience.

The consolation for United is that there remains a platform for the manager to build on. Improvements will require to be shrewd, since there is little budget to rely upon. Even so, McNamara will expect that the likes of Dow, Ciftci, Stuart Armstrong, Ryan Gauld and John Souttar will all improve after a season of prominence and experience.

United are capable of engulfing opponents with the pace and thrusts of their counter-attacks. It will irk McNamara that this aspect of the team's play was so diminished at Celtic Park.

Upgrades are necessary, and a strong central defender would bring more consistency to the side but also aid in Souttar's individual development.

John Rankin and Paul Paton are dependable in central midfield, but players with greater passing range and athleticism would make those positions more dynamic. The details will fill the manager's mind over the summer, but the general picture is still pleasing for the club.

Tactical ingenuity was not missing from United's approach, but players did not manage to rise to the demands of the occasion.

The club is now debt-free, which means that there is no pressing need to sell talent that breaks through into the first-team squad. That will also work in the chairman's favour in terms of keeping his manager, since McNamara has already caught the attention of Blackpool. That approach was rebuffed, and the idea of this project at United still not being fulfilled will challenge McNamara's ambition.

United players slumped to the ground after the final whistle. The dejection was in keeping with elements of their performance, and even putting on Brian Graham, a conventional centre-forward, in the second-half could not alter the pattern of their play.

A United supporter threw their scarf onto the trackside at the end close to the dugout. That seemed a petulant gesture, since cup finals should not generate an air of entitlement. The club has made progress this season, on and off the park, so the disappointment of a defeat in the final ought to be more readily borne.

McNamara, too, is still in the early years of his management career. The challenge now is to use the causes of this defeat, the failure to impose themselves on a grand occasion and the lack of consistency throughout the season, to improve the team further.

United did not leave Celtic Park with the trophy, but they did carry away with them some valuable lessons.