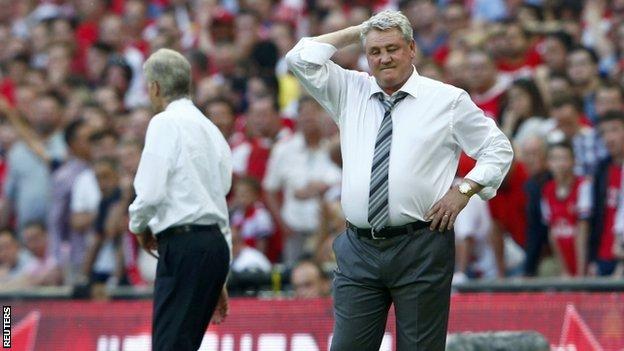 Hull City manager Steve Bruce said he was proud of his "magnificent" players for pushing Arsenal all the way in a pulsating FA Cup final.

Hull went 2-0 up inside eight minutes but finished up losing 3-2 in extra time to Aaron Ramsey's winning goal.

"In terms of effort, endeavour and determination you couldn't fault them to a man," Bruce told ITV.

"Proud? Of course I am. They were magnificent. They've given everything, but in the end we just fell short."

Bruce admitted to gripes over the first two goals, but gave credit to Arsenal for a remarkable fightback.

"Whether it is a free-kick for Cazorla, I am not so sure and then for their second goal, it is not a corner but a goal-kick, and while I don't think it is the time to whinge, these things cost you.

"I always believe your name is on the Cup, and at one stage, I really thought ours was going to be.

"But all credit to Arsenal, congratulations to them. They were under enormous pressure and have come back from a position when I thought they were down and out.

"We came so close to winning the Cup, but it was just not meant to be and just not our day."