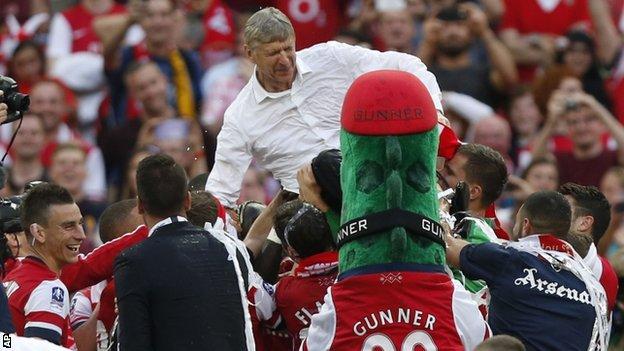 The burden dropped off Arsene Wenger's shoulders piece by piece as Arsenal's manager stood stripped of his tie and soaked from head to toe in champagne in front of their celebrating fans.

Wenger was no longer the manager described brutally - not to mention disrespectfully and incorrectly - as "a specialist in failure" by Chelsea counterpart Jose Mourinho.

He would no longer face the inquisition about Arsenal's nine years without a trophy, a barren spell that had been shrouded in the even more painful specifics of 3,283 days without success before this dramatic, and ultimately well deserved, FA Cup final win over gallant Hull City.

And he would no longer be surrounded by the suspicion that the golden touch he brought to Arsenal in the early years after his 1996 arrival had been lost forever after that win on penalties in this competition against Manchester United in 2005.

Wenger was a winner again. Arsenal were winners again after 120 dramatic minutes that forced manager, players and fans through so many of the experiences they have shared in recent years - only this time with a happy ending.

There was the despair and panic of the opening eight minutes when James Chester and Curtis Davies put Steve Bruce's underdogs two goals up, then the hope provided by Santi Cazorla's free-kick before half-time.

There was the tension that left Arsenal's followers knee-deep in chewed fingernails before Laurent Koscielny smuggled home the equaliser with 19 minutes left.

And there was the pain and anguish of chances missed and woodwork struck before Aaron Ramsey, fittingly as Arsenal's best player, wrote the chapter in extra-time for which Gunners fans had waited almost a decade.

It was a moment of such sweet release for Wenger that this most urbane, neat and tidy of men was happy to allow himself to be subjected to the indignity of being chased around Wembley by men wielding bottles of bubbly before getting the celebratory 'bumps'.

Wenger made no attempt to disguise the importance of this day.

He and his team had arrived at the point where only a win would do. Anything else would have been a catastrophe for a manager who, even though he had delivered assurances he would sign a new contract, would surely have been taken to the darkest place in his time at Arsenal by defeat.

Wearing his Arsenal tracksuit top to replace that soaked suit, Wenger admitted the win was "an important moment in the life of this team".

It was a moment of equal significance in his life as a manager because, despite the willingness of Arsenal's board to offer Wenger a new deal and his willingness to sign it, it may just have been one loss too far after that long spell.

Instead, Arsenal and Wenger's season can now be deemed a success. Champions League football is assured for the 17th successive season - and this can now be backed up by the FA Cup, tangible reward finally being delivered in the trophy room at the Emirates.

Wenger believes victory in such circumstances can be the platform for the future. And that is exactly what it is: a platform.

Few will begrudge the Frenchman his moment after watching his agonies over recent years, the days when promise has not been turned into end product, when optimism has suddenly crumbled around a highly respected and popular figure.

This was his reward, eventually after that harrowing opening spell when he must surely have feared the worst once more.

Wenger has every right to celebrate this success but he must not - and surely will not - believe that this means Arsenal do not still require serious investment.

They showed guts, character and resilience, qualities have often come under scrutiny in the last nine years, but still lack a true leader on the pitch, while there was an obvious lack of pace without the injured Theo Walcott and Alex Oxlade-Chamberlain.

The requirement for attacking reinforcements was made obvious by Olivier Giroud's lacklustre display, although he redeemed himself with a fine piece of imagination to set up Ramsey's winner with a clever backheel.

Captain Mikel Arteta: "The start of the match was shocking, you would never expect to start the game like but we showed the character desire and spirit of this team to put it right in the end."

Aaron Ramsey: "Over the last couple of seasons we've been under pressure and taken stick for not being ruthless and not taking opportunities but the manager has always believed in us."

Bacary Sagna: "Every single game was a final this season, we had really hard moments together and today again we showed that mentally we are strong. It is a moment to share with the fans."

Arsenal need more than Giroud if they are serious about challenging for the Premier League title. Wenger admitted as much with his pursuit of Gonazlo Higuain and Luis Suarez last summer. Now he must act upon it this summer.

One player who will be central to Arsenal's future is Ramsey, and there was a sense of redemption about this talented Wales midfielder being the man who provided the moment to end those years of hurt.

The 23-year-old admitted it took him years to fully get over the serious broken leg he suffered at Stoke City in 2010, struggling to win back the support of fans as he strived to regain the form and promise that made him so coveted at Cardiff City.

This season he has become the player Wenger was convinced he would be when he signed him as a 17-year-old in 2008, his absence through injury keenly felt in the final months of the season.

Arsenal were winners again. Wenger was a winner again. And now he can plot for the future with a clear head, many doubts removed and with a feeling of success that once came as second nature.