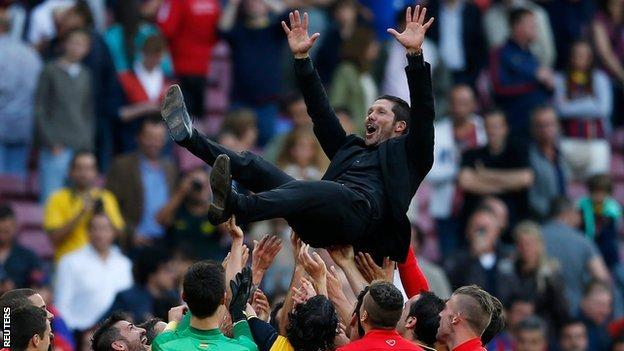 Beating Barcelona and Real Madrid to the Spanish title is one of the greatest days in Atletico Madrid's history, says head coach Diego Simeone.

Atletico drew 1-1 at nearest rivals Barca to earn the point they needed to become La Liga champions for the first time since 1996.

Their success ended Barca and Real's 10-year stranglehold on the title.

"Today will be one of the most important days in the history of the club," said Simeone, 44.

Atletico became the first club other than Real or Barca to win La Liga since Rafael Benitez's Valencia in the 2003-2004 season.

Simeone's men led the table from the end of March and, although they faltered slightly near the end with a defeat at Levante and a home draw against Malaga, they knew a point would suffice in their final-day fixture at Barca's Nou Camp.

Uruguay centre-back Diego Godin's thumping second-half header clinched their 10th La Liga title and Simeone said afterwards he never doubted that his side would fight back to earn a draw.

"I never thought for a moment the team would not do it," he said.

"They always have a response. The bigger the challenge is, the more determined they are to achieve it.

"To become champions against Barcelona is a great feeling."

Barcelona would have won the title if they had beaten Atletico and led through Alexis Sanchez's thunderous first-half strike.

But the visitors improved after the break, despite already losing top scorer Diego Costa and creative midfielder Arda Turan through injury, and deservedly levelled when Godin powerfully headed in from Gabi's corner.

"We were calm at half-time as the team had started well although the injuries to Diego and Arda were a problem," added ex-Argentina midfielder Simeone, who was a player for Atletico when they last won La Liga.

"From there though we continued to be competitive and fight for each ball which is what I asked for. We looked comfortable."

Simeone also dedicated the success to former Spain coach Luis Aragones, who was a major figure at Atletico after representing them as a player and manager and died aged 75 in February.

"I have been thinking of Luis and I am sure that he was out there helping us defend in the area in the second half," said Simeone.

Now Simeone and his team turn their attention to Saturday's Champions League final in Lisbon, where they can record a remarkable double by beating neighbours Real Madrid.