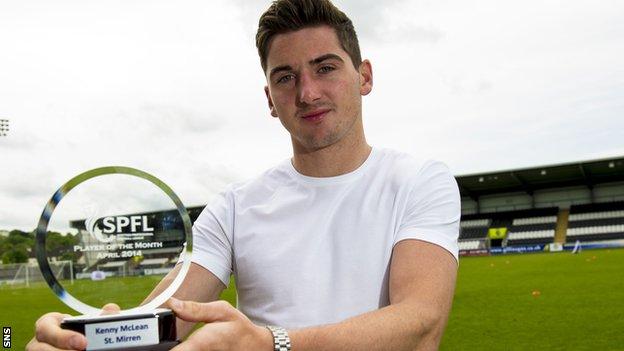 St Mirren midfielder Kenny McLean has won the SPFL player of the month award for April.

The 22-year-old scored in each of his side's three games in the month as they went unbeaten.

He is out of contract this summer and is a reported target for several teams in England, including Bournemouth.

Earlier this month, St Mirren chairman Stewart Gilmour revealed the club had made the Scotland under-21 international the "best" contract offer they could make, and conceded he would be leaving this summer.

"I think for Kenny's development, yes it's probably time for him to move down south," Gilmour added. "Sometimes a player just comes to the point when it's time to move."

McLean, who made his St Mirren debut in 2010, scoring seven goals during the season.