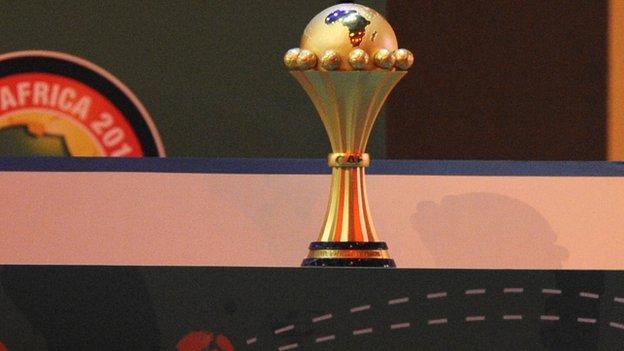 South Sudan's first ever Africa Cup of Nations qualifier ended in a crushing 5-0 defeat to Mozambique in a 2015 first round first leg tie on Sunday.

The first goal came from Josimar Machaisse. who scored from the edge of the box as he connected with a cross whipped in form the left wing.

Then four minutes before half-time defender Mexer was given space outside the area and struck a rising shot into the far corner.

Sonito got in behind the South Sudanese defender to head home a third and then scored his second after the break.

The final goal came with six minutes left to play through Isac Carvalho.

The second leg of the tie will be played in the Sudanese capital Khartoum because of the ongoing civil unrest in South Sudan.

Also on Sunday Madagascar caused a surprise on Sunday with a 2-1 win over visitors Uganda.

The hosts took the lead after just nines minutes with a penalty from Faneva Andriatsima before Carolus Andriamahitsinoro doubled the lead midway through the first half.

Madagascar had the chance to extend their advantage but they failed to score from the penalty spot in the second-half.

Hamis Kiiza then scored what could prove to be a vital away goal with a spot-kick in the very last moments of the match.

Uganda are traditionally strong at home and will believe they can overturn the deficit in the second leg in Kampala in two weeks time.

The Cranes are ranked more than 100 places above Madagascar on the Fifa rankings.

Kenya only managed a 1-0 win in Nairobi over the tiny Comoros Islands.

Belgium-based Johanna Omolo grabbed the only goal of the match 6 minutes before half-time.

There was a narrow 1-0 win for Tanzania over Zimbabwe in Dar es Salaam thanks to a goal from John Bocco.

The towering striker scored from close range early in the second-half after being set-up by DR Congo based Thomas Ulimwengu to spark celebrations in half-filled stadium.

Ulimwengu had featured for TP Mazembe as they lost 1-0 to Al Hilal of Sudan in the African Champions League on Friday, but arrived in time to play for his country as did his club mate Mbwana Samata.

Tanzania coach Mart Nooij was happy after the victory in his first game in charge of the Taifa Stars, following his appointment in April.

"My strategy in Harare will be to play football, Zimbabwe is a strong team, we are also strong, either of us could still go through," he said.

It also finished 1-0 to Liberia in their home leg against Lesotho in Monrovia. Liberia skipper Anthony Laffor scoring for the hosts five minutes before half-time.

The Leone Stars took the lead early in the game trough Sulaiman Fullah Sesay but Swaziland equalised nine minutes after the break with a deflected shot from Sidumo Shongwe.

The overall winners will face Seychelles for a place in Group D alongside Cameroon, DR Congo and Ivory Coast.

Seychelles got a bye into the second round of qualifying following the disqualification of The Gambia from all Caf competitions for two years for age cheating in the African Under-20 Championship qualifiers.

There was a goalless draw in Bujumbura between Burundi and Botswana, who had Oscar Ncenga sent off for a second yellow card in the final minutes of the match.

Central African Republic and Guinea Bissau also played out a 0-0 draw on Sunday.

The game was played in the Congolese capital Brazzaville due to the ongoing security problems in Bangui.

Another match played on neutral territory because of security concerns in the host country was Libya against Rwanda.

The match was played at the Rades Stadium in Tunisia and also ended 0-0.

The second legs of the first round matches will be played over the weekend of 31 May and 1 June.