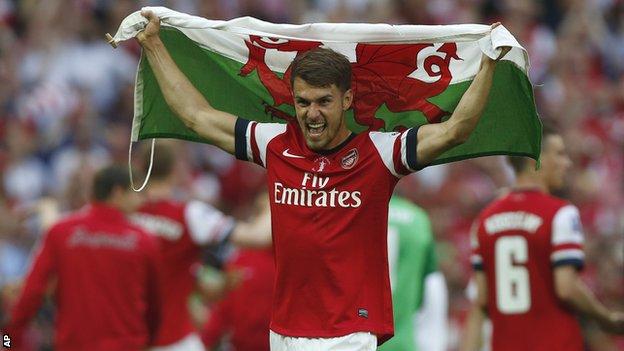 Aaron Ramsey said he had fulfilled a childhood dream after scoring the winning goal for Arsenal in their FA Cup final triumph over Hull City.

The 23-year-old Wales midfielder struck in extra time to complete an Arsenal comeback that saw them pick up a first piece of silverware in nine years.

"It was mind-blowing," Ramsey said about his 109th-minute Wembley winner.

"I have dreamt about this day for many years as a young kid coming through and it hasn't quite sunk in yet."

The Tigers had stormed into a two-goal lead with James Chester - tipped to make his Wales debut in the 4 June friendly against the Netherlands - and Curtis Davies putting them on top inside eight minutes.

Ramsey then took centre stage as he hit his 16th goal of the season to end the Gunners' near-decade run without a trophy.

"I'm more delighted for the team that we have actually won a trophy this year," Ramsey added.

"I think we have deserved it. The manager [Arsene Wenger] deserves it as well - he has stuck by his players over the past few years after we were questioned a few times.

"He never had any doubt in us and we believed in ourselves as well and hopefully this will now be the start of many."

Ramsey, who missed almost four months of the season with a thigh injury, felt the first goal in their comeback - scored just nine minutes after Hull had gone two ahead - gave them the incentive to go on and be victorious.

"We knew ourselves that Cazorla's free-kick was important and we always believed we had time to get back into the game," he said.

"You could tell that they were dropping off a bit but I felt that we were in control and we took advantage of that in the end.

"In the second half of extra time, at 2-2, things are going through your mind about penalties. It was important to try and keep going even though the legs didn't want to and I managed to get into the box and score the winner."