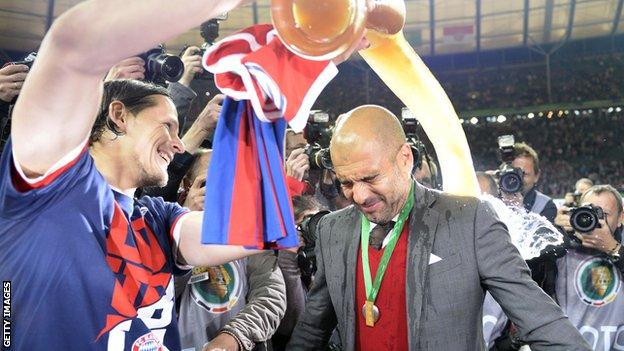 Pep Guardiola described his first season as Bayern Munich manager as difficult despite leading the German side to league and cup success.

Bayern beat Borussia Dortmund 2-0 in the German Cup final on Saturday, to add to the Bundesliga championship they won in record time.

They also won the Club World Cup and Uefa Super Cup earlier in the season.

"This was a very difficult year for me, my first in Germany, so four titles is good," said Guardiola.

"We have to keep working. There is much work left to do.

"I still have not managed to form the team according to my vision. It is, after all, my first year."

Guardiola was appointed last year, replacing Jupp Heynckes who had led Bayern to league, cup and Champions League success in 2012-13.

Under Guardiola, Bayern went unbeaten in the Bundesliga on their way to winning the title on 25 March, the quickest it has ever been won.

They suffered their first league defeat in 53 games in April, and since then their form has tailed of dramatically.

Bayern lost 3-0 at home to Dortmund in the league and also exited the Champions League at the semi-final stage following a 5-0 aggregate defeat to Real Madrid.

"It was justified criticism," Guardiola added.

"It was things I did that I should not have done. The criticism for the game against Real was also justified but it is part of the work I do.

"My German is not that good yet and to succeed Jupp Heynckes after his success was a challenge but four titles are not bad."