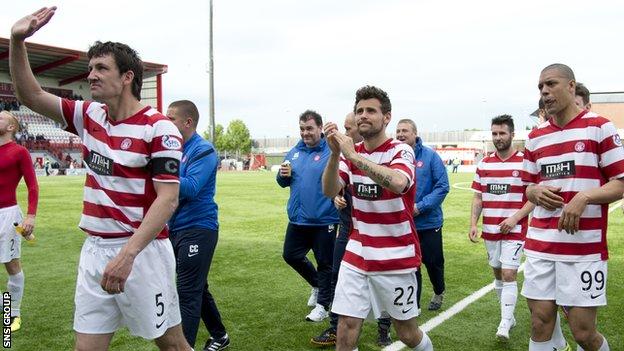 Manager Alex Neil has no concerns over exhaustion as Hamilton prepare for their Premiership play-off final.

"Energy shouldn't be a problem," said Neil. "The boys are fit enough. Mentally, you need to get into their heads and make sure they are ready.

"But I don't think fatigue will come into it. If we perform well enough, then we are capable of winning."

Tony Andreu scored after 16 minutes to give Hamilton a 1-0 win over Falkirk at New Douglas Park, sealing a 2-1 aggregate success.

"The players have worked so hard over the season and in my opinion they deserve to get a crack at it," Neil told BBC Radio Scotland.

"I'm so proud of them and I'm just hoping they can see it through.

"Our record home and away this season is pretty good, so we think we have a chance in these one-off games.

"I just hope they do themselves justice and do credit for what they've done already."

Neil watched from the stand during the two matches against Falkirk but will be available to take his seat in the dugout, or play, against Hibs now that he has served a suspension for his second red card of the campaign.

However, Neil is not likely to make too many changes to a side that has only lost one of their last 15 games.

"We're pleased with what we've done but, as far as I'm concerned, as soon as we've finished patting each other on the back then it's finished," added the 32-year-old.

"We'll be back to work tomorrow, seeing where we are with any niggles or knocks and then start preparing for the game on Wednesday.

"All we've done is give ourselves a chance. That's it."