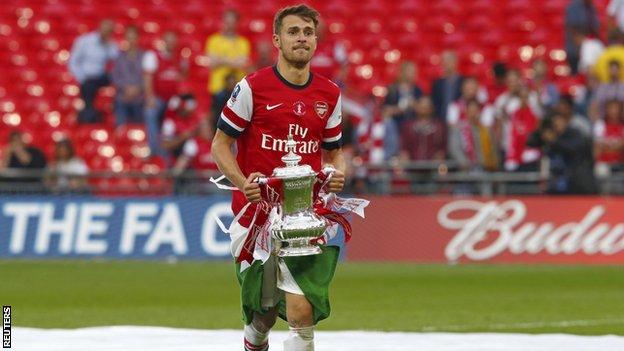 Aaron Ramsey is on course to be a great player according to former Wales international Neville Southall.

The 23-year-old Arsenal midfielder scored an extra-time winner as the Gunners came from 2-0 down to beat Hull City 3-2 in Saturday's FA Cup final and win their first trophy in nine years.

Ramsey was also named man of the match for his display.

"If he carries on learning at the rate he's learning he's going to be a great player," said former keeper Southall.

Welsh midfielder Ramsey has been in fine form this season and his winner at Wembley was his 16th goal of the season.

His eye for goal and performances helped Arsenal to the top of the Premier League earlier in the season but a thigh injury suffered in December saw the former Cardiff City player missing for almost four months.

Ramsey's spell on the sidelines coincided with the Gunners' title challenge fading.

Former Everton keeper Southall believes the best is yet to come from the player who has captained his country.

"In football terms he's still very, very young and in [Arsene] Wenger he's got a really good manager who knows the game.

"I think he's come on leaps and bounds and just needs to play continual football for a while.

"Hopefully Champions League football will do him the world of good."

Ramsey's Wales team-mate Gareth Bale moved from Tottenham to Real Madrid for a world record £85.3m in the summer of 2013 after impressing in the Premier League and European competition.

But Southall thinks the best place for Ramsey to develop and fulfil his potential is at Arsenal.

"If Arsenal do well in the Champions League then obviously he's going to be under a bigger spotlight and if Wales can qualify [for a major tournament]," said Southall.

"But for me at the moment he just needs to get his head down for two or three seasons and produce things every season and take it from there."