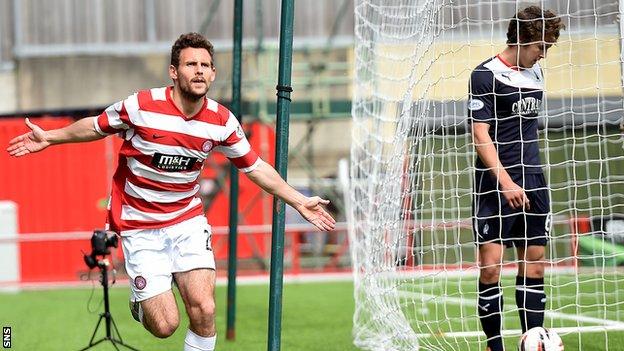 Play-off match-winner Tony Andreu insists he will not be distracted by talk of him playing Premiership football for anyone other than Hamilton Academical.

The Frenchman was at his eye-catching best as Accies beat Falkirk 1-0 to seal a 2-1 aggregate win in the semi-final and is desperate to win promotion against Hibernian in the final.

"My head is against Hibs, definitely, because I think we can be promoted," said Andreu.

"After, we'll see what happens."

The 25-year-old arrived at New Douglas Park last summer from Livingston, and exceptional form led to Accies extending his deal in March.

"I signed a two-year contract, but it definitely is my goal to play in the Premiership," he added.

"Now I'm an Accies player and I will stay for two years, for now. So my head is just against Hibs."

Andreu has scored 14 times for Hamilton this season, including a hat-trick in the 10-2 mauling of Morton on 3 May.

Hibs visit New Douglas Park for the first leg of the Premiership play-off final on Wednesday and the former Stade Nyonnais man is eager to get the tie started.

"The pressure is on Hibs because they didn't have a great season and now they have to prove they can stay up," added Andreu.

"We have nothing to lose. We have proved all season we can play in the Premiership. Now it's a second chance after losing the title.

"I say it's in our hands because if we are good, we can beat them. I'm sure of that.

"It's maybe the most important game for the team, maybe in their career for most of them - me included.

"We have to be confident. We don't have to fear Hibs, we just have to play our game and see what happens."