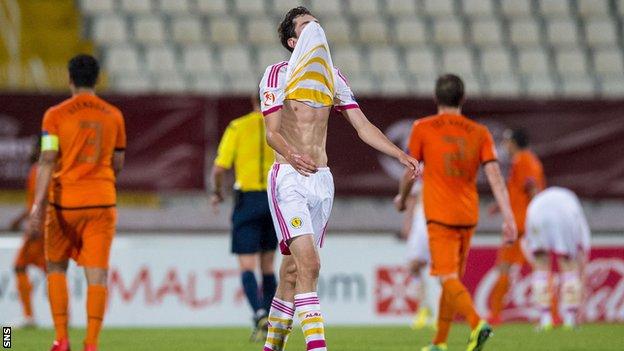 Scotland under-17s crashed out of the European Championships after a 5-0 defeat by the Netherlands in the semi-finals.

A Calvin Verdonk penalty and Abdelhak Nouri's goal sent the 2011 and 2012 champions ahead at the break.

Steven Bergwijn, Segun Owobowal and Dani van der Moot were also on target in the second-half.

The Dutch will take on England, who beat Portugal 2-0, in Wednesday's final in Malta.

Scotland lost 2-0 to Portugal in their opening fixture of the tournament, but a 2-0 triumph over Germany and a 3-1 win against Switzerland sealed their passage to the last four.

And they were punished in 33 minutes when Cameron Ballantyne brought Jari Schuurman down in the box and Verdonk sent Robby McCrorie the wrong way from 12 yards.

Nouri added a second after a defensive mix-up between McCrorie and Aidan Nesbitt, and Bergwijn made it 3-0 after the interval with a low strike.

A cracker from Owobowal and van der Moot's close-range finish rounded off the scoring.