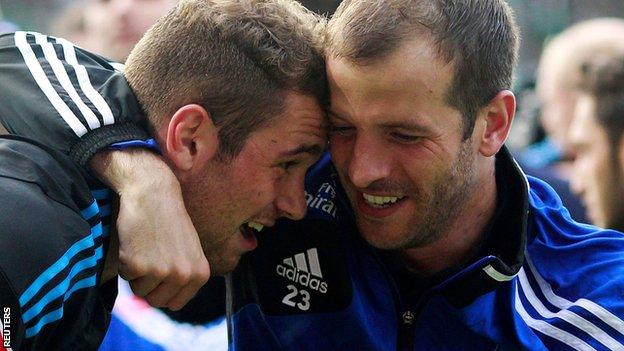 Six-time German champions Hamburg retained their Bundesliga status with a nervy away-goals win over Greuther Fuerth in their relegation play-off.

The former European champions edged the tie to remain the only club to have played in every season of the Bundesliga since it began in 1963.

Stephan Fuerstner levelled for Fuerth but Hamburg survived with the 1-1 draw.

The German top-flight's relegation system sees the bottom two automatically demoted, with the third-bottom side - this season, Hamburg - going into the play-off against the team which finishes third in Bundesliga 2.

Fuerth, who were aiming for an instant return to the top-flight, blew a late opportunity to win the game - and promotion - when striker Ilir Azemi mis-kicked when well placed inside the Hamburg box.

The visitors, captained by ex-Tottenham attacking midfielder Rafael van der Vaart and including former Premier League defenders Johan Djourou and Michael Mancienne, hung on to spark jubilant celebrations between the players and their travelling supporters.

"It does not matter how we stayed up. We just did," said Germany forward Lasogga, who returned for the play-off matches after a two-month absence through injury.

"We did not win the title today but stayed in the Bundesliga and that's what matters."

Eintracht Braunschweig and Nuremberg were relegated with Cologne and Paderborn securing automatic promotion from the second tier.