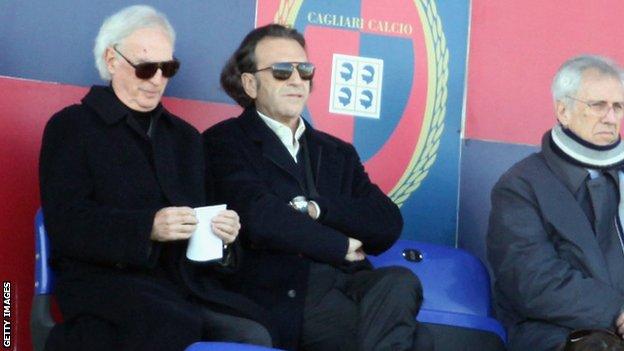 Cellino has been in charge of the Serie A side since 1992, but has been looking to sell since taking control of Leeds.

"I am too busy cleaning up the mess at Leeds. I cannot have two clubs," Cellino told BBC Radio Leeds.

Find out more about the 'King of Corn'

Cellino said he is meeting with 37-year-old Giulini this week and hopes to conclude a deal by Wednesday.

Italian businessman Cellino, 57, completed his takeover of the Yorkshire club last month after winning an appeal against the Football League's decision to block the move.

He was disqualified from owning the Championship side after failing the Football League's owners' and directors' test, but an independent QC overturned the decision.

Cellino recently said the club, which loses more than £1m per month, was spending £100,000 per day on operating costs. The latest accounts showed Leeds made an operating loss of almost £10m for the year up to June 2013.

He recently told BBC Radio Leeds it was impossible for him to run both clubs: "I have to choose one to save. I choose Leeds."

Cagliari, who have been in the Italian top flight since 2004, finished 15th last season.

Giulini, 37, has close links to the Moratti family who owned Inter Milan until selling their majority stake last year.